According to a report by Bloomberg, Goldman Sachs has estimated that if China were to retaliate against the U.S. for blacklisting Huawei with a ban on Apple’s products, the iPhone maker’s earnings could drop as much as 29%. With a neutral rating on Apple’s stock, Goldman also lowered the company’s price target to $178 from $184. 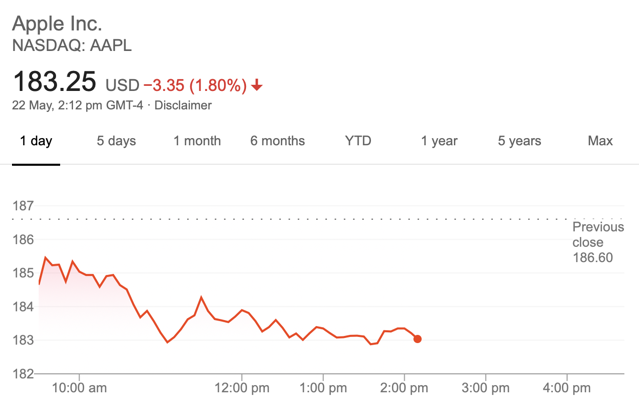 Last week, the U.S. blacklisted Huawei Technologies, placing a question mark over the Chinese company’s partnerships with U.S. chipmakers, software, and component suppliers. As a result, worries over the wider impact of the trade war have intensified.

Some analysts predict that China could retaliate by either restricting iPhone production in some way, or by simply banning sales of Apple products in mainland China:

While Goldman takes no view on the likelihood of a potential ban, such a restriction would represent 100% of estimated Apple earnings exposure to both mainland China and Hong Kong, assuming some offsetting impact from cost savings in sales and marketing, analysts including Rod Hall wrote in a note. The stock fell 0.5% in U.S. pre-market trading.

Except for the latest XMM iPhone modems from Intel, A-series chips, and some display components, majority of the rest of the iPhone supply chain is based in mainland China.