Bloomberg: Apple to Expand iTunes Radio to Canada in ‘Early 2014’

Bloomberg reports Apple is set to expand iTunes Radio to Canada by “early 2014”, corroborating an earlier 9to5Mac report which noted the company is actively recruiting a Canadian position for the music service.

Apple Inc. plans to expand iTunes Radio to English-speaking countries outside the U.S. by early 2014, beating industry leader Pandora Media Inc. (P) to the U.K. and Canada, people with knowledge of the situation said.

ITunes Radio is also set to start early next year in Australia and New Zealand, where Pandora already operates, said the people, who asked not to be identified because the plans aren’t public. Nordic countries are also being targeted in the same time frame, the people said. 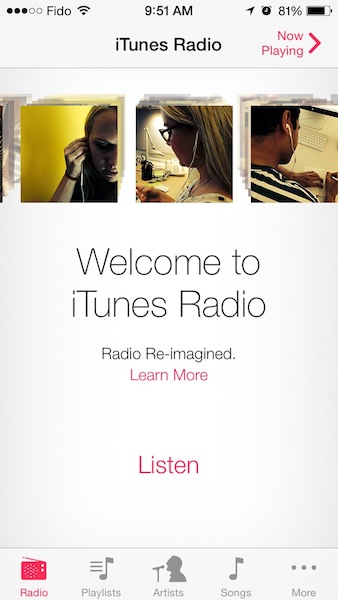 Sources say the push by Apple will also see iTunes Radio launch in the U.K., Australia and New Zealand, along with planned expansion for Nordic countries. The goal appears to target expansion in countries where Pandora has not launched yet, such as Canada.

Apple is being able to move “faster” than Pandora as sources say it has negotiated international rights with Vivendia SA’s Universal Music Group and other record labels, unlike Pandora which relies government granted rights, which has limited its service to the USA, Australia and New Zealand.

The fast expansion is being compared to Apple’s fast rollout of the iTunes music store from over a decade ago, according to one person familiar with the matter.

Currently, iTunes Radio is only available in the USA, but this workaround will allow users to access the service outside of the country. Anyone excited for this?