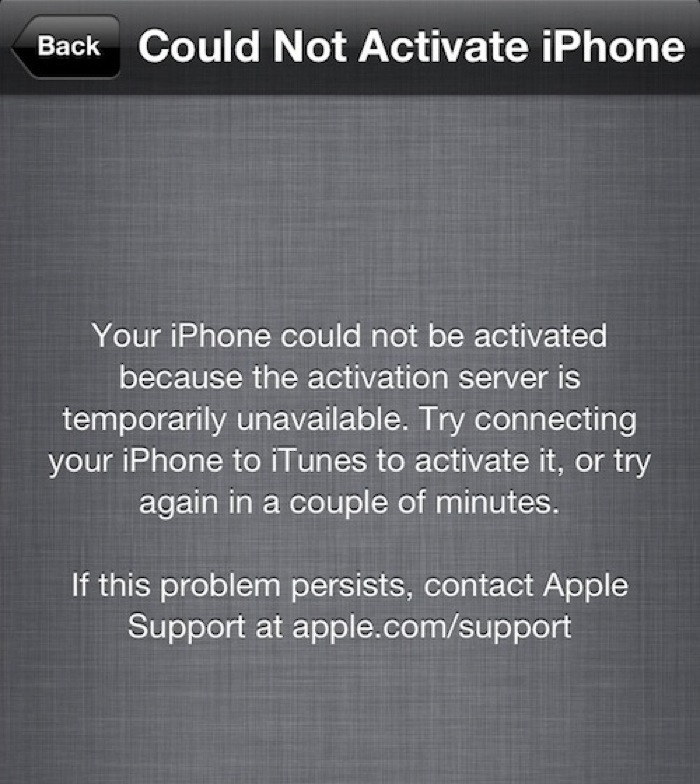 The day before yesterday, an older iOS 7 beta install expired on one of my iPhone 5 devices, displaying an error on the screen “unable to activate your iPhone….please register your device with Apple’s developer program“. Since the iPhone 5’s UDID was already registered with Apple as a developer device, I figured it might need the latest beta to activate. So I went ahead and updated it to the latest iOS 7 beta 3.

While the whole updating process went smooth, the same “activation error” message popped up at the end. I was like, “what the…?”, knowing I did everything by the book during the update process. Well, looks like Apple’s iPhone activation servers are experiencing frequent outages these days, since a number of other iPhone users are also reporting the same issue (via MacRumors).

While Apple is currently working to fix its developer systems and rebuild its entire database following a recent security breach, the company seems to be facing extended down times with its activation servers as well. When a forum reader at MacRumors contacted Apple about the problem, he was informed that ‘company’s activation servers are currently down’. AT&T has also confirmed the outage, with similar information posted in Apple’s discussion forum as well.

Are you experiencing this issue as well? If yes, did you eventually succeed in activating your iPhone with repeated attempts?

LastPass, a popular password manager for mobile, desktop, and more, recently suffered a security breach where an unauthorized party gained access to "certain elements" of customer data using information obtained from a previous hack back in August. The company said in a Wednesday blog post that it discovered unusual activity within a third-party cloud storage...
Nehal Malik
10 mins ago

Apple’s 10th generation iPad launched this year to some mixed reviews, and today, the experts over at iFixit have given it their signature teardown treatment. “It’s such an odd device – in both good and bad ways,” says iFixit. "A few genuine leaps forward for consumers sit alongside some truly baffling design choices." "You’d expect...
Usman Qureshi
34 mins ago