Apple Extends Developer Memberships By One Month to Offset Downtime

Last night Apple emailed its developers to notify them all developer program services are now back online, after its initial outage back on July 18. Apple acknowledged the downtime as a result of a security overhaul of its systems after a hacking attempt. The company promised services would return back online earlier this week and everything is back to normal as expected.

We are pleased to let you know that all our developer program services are now online. Your patience during this time was sincerely appreciated.

We understand that the downtime was significant and apologize for any issues it may have caused in your app development. To help offset this disruption, we are extending the membership of all developer teams by one month. If you need any further assistance, please contact us. 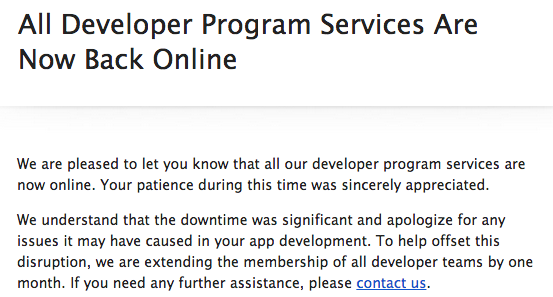 To make up for the outage, Apple has offered to extend the memberships of all developers by an extra month due to the downtime. Nice move.