So it appears we now know the reason why the Apple Developer website has been down since Thursday–there was a hacking attempt to extract personal information from developers.

Apple has notified developers via email about the intrusion below:

Last Thursday, an intruder attempted to secure personal information of our registered developers from our developer website. Sensitive personal information was encrypted and cannot be accessed, however, we have not been able to rule out the possibility that some developers’ names, mailing addresses, and/or email addresses may have been accessed. In the spirit of transparency, we want to inform you of the issue. We took the site down immediately on Thursday and have been working around the clock since then.

In order to prevent a security threat like this from happening again, we’re completely overhauling our developer systems, updating our server software, and rebuilding our entire database. We apologize for the significant inconvenience that our downtime has caused you and we expect to have the developer website up again soon. 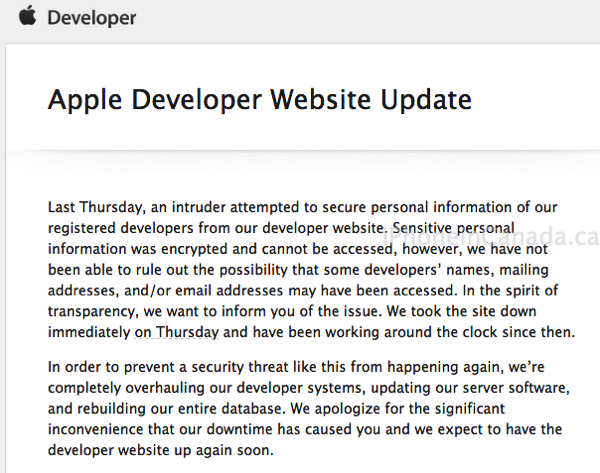 Apple says they took the site down right away after they detected the hacking attempt and right now a complete security overhaul is underway. Looks like the earlier speculation of a hacking attempt by Marco Arment came true.

Apple has confirmed to The Next Web credit info and anything related to purchasing items in the App Store was safe from the hack: