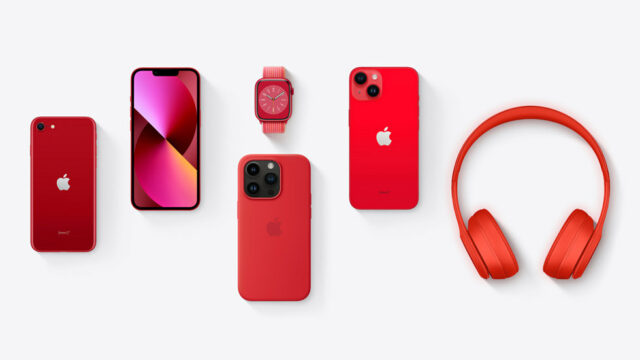 December 1st marks World AIDS Day and Apple is continuing to support Global Fund in its worldwide fight to stop AIDS. In doing so, Apple Stores around the world are promoting (PRODUCT)RED displays and products. Additionally, Apple is promoting apps, videos, and other materials on its products to help increase visibility.

Since 2006, Apple has donated more than a quarter of a billion dollars in grants. These grants have gone on to support over 11 million people worldwide with care and services. Additionally, Apple’s support has provided over 197 million HIV tests in sub-Saharan Africa. Finally, in supporting global initiatives, Apple reports it’s helped over five million HIV positive mothers prevent mother-to-child transmissions.

“Over the past 16 years,” says Apple says. “Apple and its customers have been part of the global fight to end AIDS.” 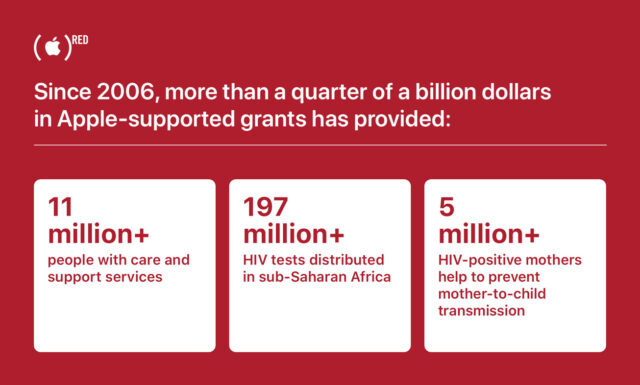 On World AIDS Day 2022, Apple Stores around the globe are showing the company’s further support. The Cupertino company is highlighting its many devices available in (PRODUCT)RED for the occassion. Customers can get their hands on a red-coloured iPhone 14, iPhone 14 Plus, iPhone SE, and Apple Watch Series 8. Additionally, Apple has a number of (PRODUCT)RED accessories including the Silicone Case with MagSafe for iPhone 14 and iPhone 14 Plus. Additionally, the Apple Watch Sport Loop, Sport Band, and Braided Solo Loop bands are available in red.

Apple states that a portion of proceeds from every (PRODUCT)RED purchase goes to the Global Fund.

The company also has a selection of seven Apple Watch faces in red that can be downloaded here.

“In honor of World AIDS Day Apple is offering new ways for customers to continue to support the Global Fund, raise awareness, and learn more about the battle to end HIV/AIDS,” Apple says.

To better help educate and raise awareness on the AIDS virus, Apple’s App Store is promoting Preppy. This app is designed to assist those affected by HIV by making it easier to track pre-exposure prophylaxis (PReP). The app can help track PReP intake, checkups, and adding other useful information intro a calendar.

For U.S. customers, Apple Music, Apple TV, and Apple Books all feautre curated content focusing on building AIDS awareness. It appears as though this curation isn’t available in Canada, unfortunately. However, its encouraged that users do seek out any resources they may have at their fingertips.