Apple’s 17% growth year-over-year wasn’t enough to maintain its grip on the global smartphone market. The same goes for its rival, Samsung, which shipped double the units Apple did, but still lost market share on a year-over-year basis, according to the latest study released by Strategy Analytics.

Breaking down to manufacturers, we know how many iPhones Apple sold between January and end of March. What Strategy Analytics emphasizes in its study is the 17% annual growth which accounted for 15% of the smartphones shipped globally, during Q1 of 2014, down from 17% recorded the same period a year prior.

Although Samsung doesn’t report its quarterly sales, Strategy Analytics estimates that the South Korean manufacturer shipped 89 million smartphone units and captured about 31% of the global market. This compares to the 32.4% reported a year prior. 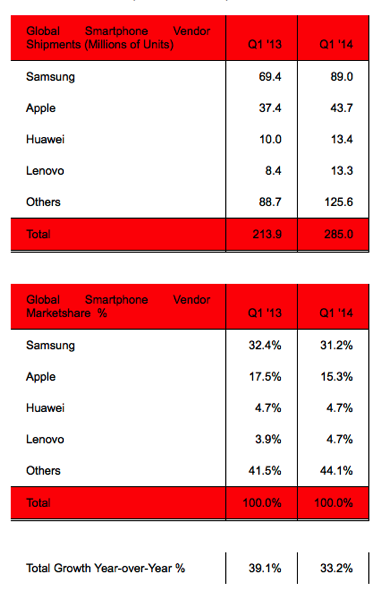 Other notable market players like Huawei and Lenovo have captured 4.7% market share, respectively. Apple and Samsung together account for nearly half of the global smartphone shipments, more exactly 47% — down from 50% a year prior.

As worker unrest continues onsite of Foxconn's Zhengzhou plant in China, Apple is expected to face a shortfall of up to an estimated six million iPhone 14 Pro units. Foxconn's plant, which is often referred to as 'iPhone City' due to its size and importance in Apple's supply chain, has been facing worker protests. Due...
Steve Vegvari
33 mins ago