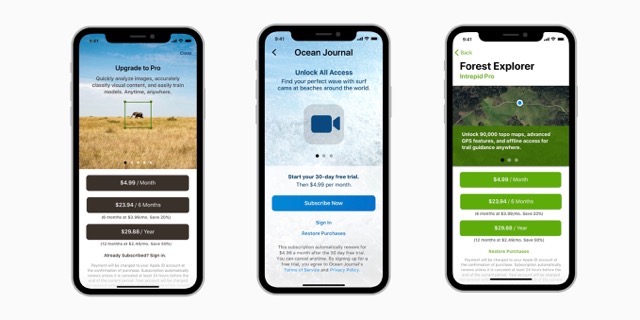 In its updated guidelines to developers for in-app subscriptions, Apple has explained in detail how the billing amounts should be clearly presented to users. As pointed out by 9to5Mac, Apple’s updated documentation even offers full sample text for the fine print that needs to be shown at the bottom of subscription purchase flows.

“Payment will be charged to your Apple ID account at the confirmation of purchase. Subscription automatically renews unless it is canceled at least 24 hours before the end of the current period. Your account will be charged for renewal within 24 hours prior to the end of the current period. You can manage and cancel your subscriptions by going to your account settings on the App Store after purchase.”

As per Apple’s documentation, the price of a monthly subscription must be clearly shown for all in-app subscriptions, whereas any conversions into yearly savings should be less prominent than the actual amount customers pay in each renewal period.

Apple says that the real price users pay has to be shown in the largest text font on the page. The yearly cost must also be prominent and the monthly breakdown should be “displayed in a subordinate position and size”.

The new guidelines come as some App Store apps currently do not follow the rules. For example, Tinder advertises to users a 6-month subscription as $8.83/month without making it clear that the transaction is actually around $52 upfront for a subscription with a 6-month duration.

In this week's edition of his Power On newsletter, Bloomberg's Mark Gurman speculated that Apple could launch an even pricier iPhone model, positioned above the "Pro Max," as early as 2024. The renowned analyst previously reported that Apple could rename this year's iPhone 15 Pro Max the iPhone 15 "Ultra." However, he now believes the company is...
Nehal Malik
58 mins ago