Apple has topped Interbrand’s list of the Best Global Brands for the ninth year in a row. 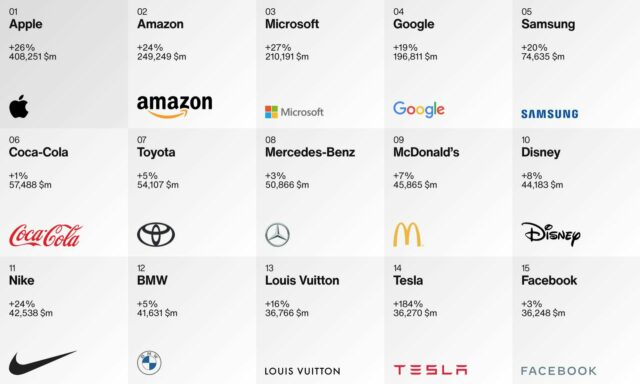 The world’s business sectors have experienced dramatic shifts over the last 18 months, which is exemplified in the latest Interbrand Best Global Brands research for the year, in which Apple has been named the world’s most valuable brand, beating out Amazon, Microsoft, Google, and Samsung, among many others.

According to the global brand rankings, Apple, valued at $408.3 billion USD, retained the top spot in the ranking for the ninth consecutive year, while electric vehicle maker Tesla was the highest gainer in the list with a 184 percent jump in its brand value to $36.3 billion.

Tech companies ruled in the top 10, with no changes to the top three of Apple, Amazon, and Microsoft. The top three brands account for a third of the total table value this year.

With Apple in the top spot for 2021, Gonzalo Brujó, global president of Interbrand Group, cites the company’s investment into new segments, beyond a core focus on selling iPads and iPhones, that enrich the lives of users. The company’s ongoing subscriptions through Apple Music, Apple TV, and its iCloud service were other aspects cited as being a major element in Apple’s continued success.

“It is like operating like a logistics company to make sure that you can receive things more. That retail channel and the way that they work with their retail stores is working very well,” he stated. “One of the biggest successes by buying online with Apple is having everything related to auto-pay… a lot of things are happening there and it is moving along well.”

This week, Apple launched its latest MacBook Pro laptops — powered by the company’s in-house M1 Pro and M1 Max chips — and new AirPods as it looks to diversify its product range and attract more professional users.

The brand value of the 100 firms now stands at $2.7 trillion USD, up 15 per cent from $2.3 trillion last year, the highest-ever growth rate in the 22-year history of Interbrand’s Best Global Brands ranking.