Interbrand has just announced the brands that have fared best in its 2020 Best Global Brands report, with Apple coming out on top once again, followed by Amazon and Microsoft in the second and third spots. 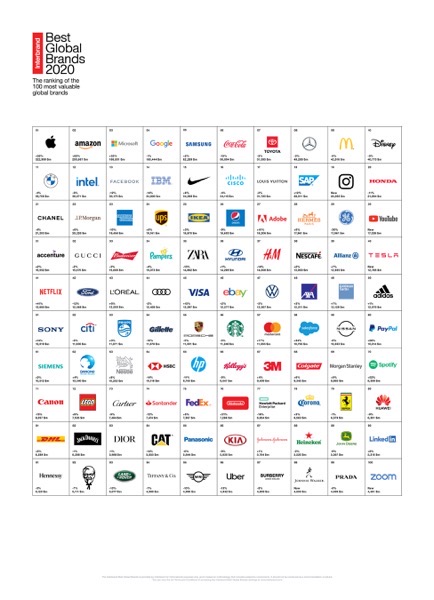 While Apple retained its top spot in the table, Amazon was a top performer at #2 after increasing brand value by 60%, with a valuation of US $200,667 million. Microsoft’s increase in value this year to US $166,001 million allowed it to overtake Google (#4) to reach the number 3 spot.

As expected amid the global pandemic, social media and communication brands have fared well in the past 12 months, with Instagram (#19), YouTube (#30), and Zoom (#100) entering the rankings for the first time. Tesla also re-entered the rankings at #40, having last appeared in the Best Global Brands table in 2017.

After two years as the top growing sector, luxury brands took a hit in 2020, with all but one brand value (Hermes #28) falling between 1-9%.