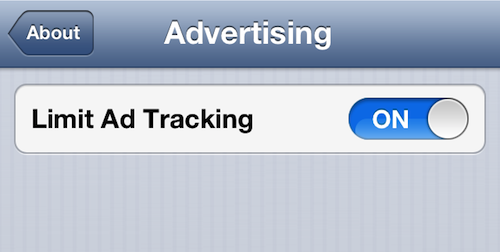 A device’s UDID is a long series of letters & numbers used to identify an iOS device. If you own an iPhone, iPod, or iPad, the UDID for each one of your devices is unique. Application developers and advertising companies formally tracked this code to learn usage among applications. Since March, Apple has denied any applications that made use of UDID tracking.

Concerns under the privacy sector have arisen over recent times. Applications such as path in-which would access a users private data without permission have added to the concern over this past year.

Today Apple introduced what’s called a Advertising Identifier. It is fairly similar to the UDID, but doesn’t contain any type of personal information. Apple explains:

Apple also added a new setting within the ‘About’ tab of iOS devices. If users want to limit ad tracking they will not receive advertisements targeted to their liking.

Anyone who has the newly released iOS 6 GM installed can get an early look at the setting. Everyone else will have to wait until the official release of iOS 6 on September 19th.

What were your thoughts on applications tracking your UDID? Did you consider it a privacy breach?