According to AppleInsider, Apple has been granted two new patents for interchangeable iPhone camera lenses by the U.S. Patent and Trademark Office, which cover different methods of attaching lenses and camera modules to a portable electronic device. The patents are titled “Back panel for a portable electronic device with different camera lens options” and “Magnetic add-on lenses with alignment ridge.” 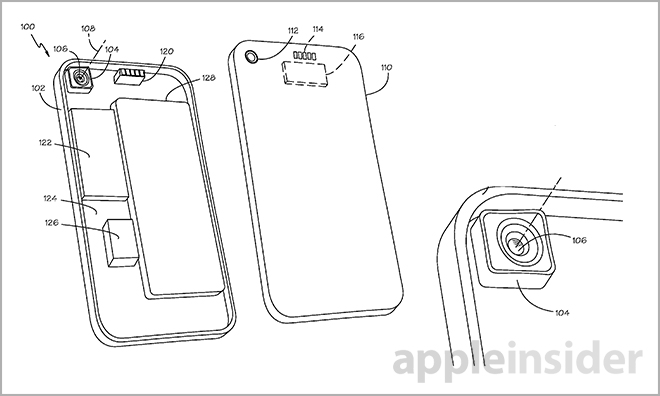 The first patent describes a portable electronic device, such as an iPhone, that features an imaging subsystem and removable panel with optical components. The removable case portion includes components that can “substantially change the optical characteristics of the subsystem”. A simple example would be a wide-angle lens attachment, while more sophisticated embodiments cover electrical modules for image stabilization and zoom.

The second patent covers a magnetically-attachable camera module that fits on to an iPhone to extend its on-board imaging capabilities.

“According to the document, an alignment feature incorporated into the device housing allows for a separate camera add-on module to be attached in line with the on-board system’s optical axis. Two separate techniques of attaching the module are described. In the first, the alignment feature is fixed within the aperture in the housing, much like a modern DSLR. The second embodiment has the alignment mechanism fitted to the camera module in alignment with the camera optics.”

Apple’s magnetic add-on lens patent was first filed for in 2012. You can read more about it at this link.