Multiple international trademark applications for an “AirPods” audio accessory, filed by a shell company, suggests Apple might be working to bring wireless version of its EarPods headphones to market.

A company based out of Delaware named Entertainment in Flight, LLC, filed the AirPods trademark application with the U.S. Patent and Trademark Office on September 22, reports MacRumors. This is not the first time Apple has set up shell corporations as a tactic to keep secret projects out of the public eye ahead of release. 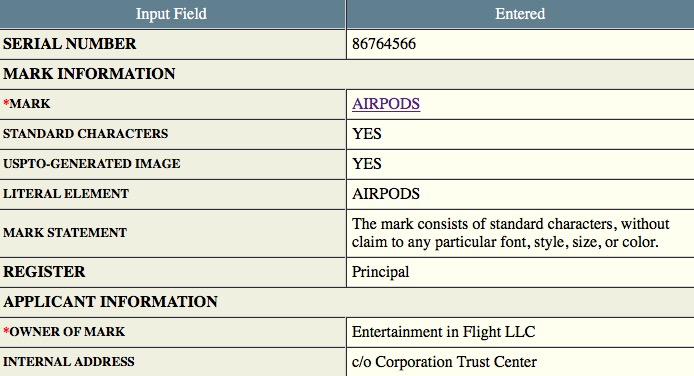 Entertainment in Flight designated the trademark for AirPods under International Trademark Class 9, a wide-ranging category covering electronics and scientific apparatus.

The product that will be associated with “AirPods” is still unknown, however there may be details within the filings that could shed some light on that. As it stands right now, Apple has “EarPods” as the brand name for its in-ear headphones, which come bundled in the box with its iPhone lineup. It could stand to reason that “AirPods” would follow the same idea as the current line of headphones, but be a wireless version.

It’s certainly an interesting look at what Apple could be planning. Apple already has sales in headphones thanks to Beats, but releasing AirPods will most likely not step on that too much.