Top hedge funds are confident that Apple “without a doubt” could achieve a $1 trillion market cap next year. During a five-minute interview with Reuters, Michael Corcelli, head of the Miami-based Alexander Alternative Capital, expressed his belief that “Apple is the most obvious thing that has to go up.”

There are multiple factors driving Apple toward the amazing $1 trillion market cap: first, he expects (just like the majority of analysts) record sales of the iPhone, the iPad, and other products during this holiday season. Secondly, Apple’s stock is attractively priced at its current $110+. As Steve Einhorn, a top executive at Leon Cooperman’s $10 billion hedge fund Omega Advisors, put it: Apple’s stock is a “double-digit returner.”

“We own it, and we like it,” he said, speaking at the Reuters Global Investment Outlook Summit in New York. The company could reach the trillion-dollar mark “eventually,” he said. 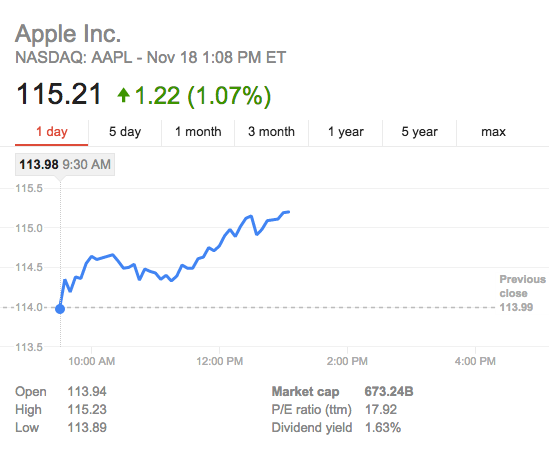 Another believer is activist investor Carl Icahn, who urged Apple many times to increase its stock buyback program, as it sits on $135 billion in cash and marketable securities. Although he owns 53 million Apple shares, he would refrain from selling them since at their current level, he says, the stock price in undervalued.

“Apple is one of the best companies I would say of the last few decades,” Icahn said on Monday. Because Apple is undervalued and has a pile of money, “it’s like a no-brainer to buy your own stock back.” With $135 billion in net cash and marketable securities on its balance sheet, Apple can execute on both stock repurchases as well as new product investments and products, Icahn said.