Analysts predicting record iPhone sales for the holiday quarter may be right: The iPhone 6 represented 19% of all smartphone sales in the US for the three months up to November, 2014, according to Kantar Worldpanel ComTech data.

The Galaxy S5, which captured 10% of all smartphone sales, turned out to be the second-most-popular device following the iPhone 6, the market research firm found. 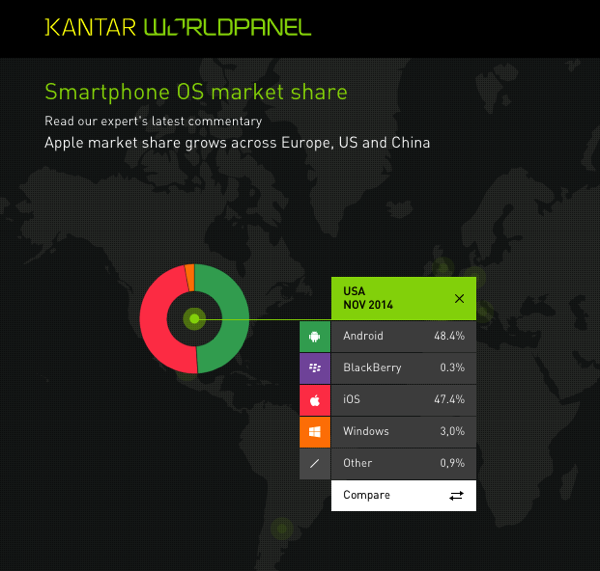 Although Kantar’s previous report had already suggested that the iPhone 6 was in great demand, the numbers speak for themselves: As of November 2014, Apple’s market share in the US had risen to 47.4%, up from 43.1% recorded during the same period a year ago.

“While remaining the dominant global OS, Android’s market share dropped in most European markets and in the US where the decline was the first since September 2013”, said Carolina Milanesi, Chief of Research at Kantar Worldpanel ComTech. “A decline in Android market share does not necessarily translate into bad news for all the ecosystem’s players. The choice of brands and devices within the ecosystem empowers consumers to drive different fortunes for the players in it”, added Milanesi. In the three months ending November, Samsung particularly felt the pressure and saw its market share decline across Europe and in the US. By contrast Motorola’s share grew thanks to the refresh of the Moto X and Moto G offering good value for the money.

While Android dominated the mobile market across Europe (69.9%), it has lost 3.2% compared to the same period in 2013. The biggest drop was recorded in the UK, where it dropped 6.7%, Dominic Sunnebo, strategic insights director at Kantar said. 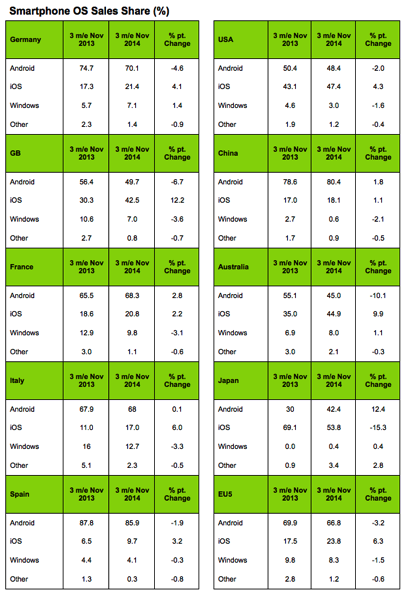