The U.S. Patent and Trademark Office (USPTO) has today published two Apple patents titled “User interface tools for commute assistant” and “Location-based features for commute assistant”, revealing Apple’s take on mass transit mapping, a feature missed by many iOS users ever since Google Maps was replaced by Apple Maps back in 2012, AppleInsider reports. 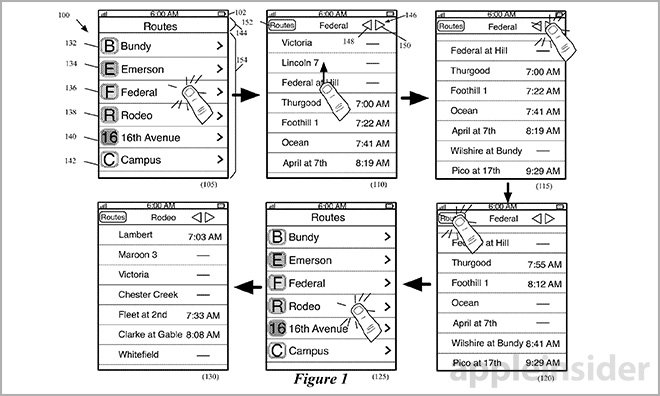 The two filings detail a user-friendly interface for viewing various mass transit services, including buses, shuttles, trains, metros and subways, on an iOS device. The source points out that since Apple mentions Airplanes, helicopters and even boats in the patent, Apple may be looking to create “a one-stop-shop for users’ commuting needs”. Furthermore, everything revolves around a “dynamic focus table”, which can be described as a rolling list of transit types, routes and stops.

“As outlined, Apple’s dynamic focus table appears to be quite flexible and easy to use, with a familiar layout modeled after current iOS lists and charts. For example, users can select a particular route, either searched for by name or offered by the device based on current location, to view trip details and other relevant information. Simple tap and scroll gestures are available for navigation.

When the dynamic table is populated with route information, users can scroll through trips and services scheduled to travel along that route throughout the day. Alternatively, time-based queries may show upcoming trips at a particular location, while yet another example allows users to browse all trips moving through a bus stop or area, irrespective of time.”

The two Apple patent applications were filed for back-to-back in November 2013.