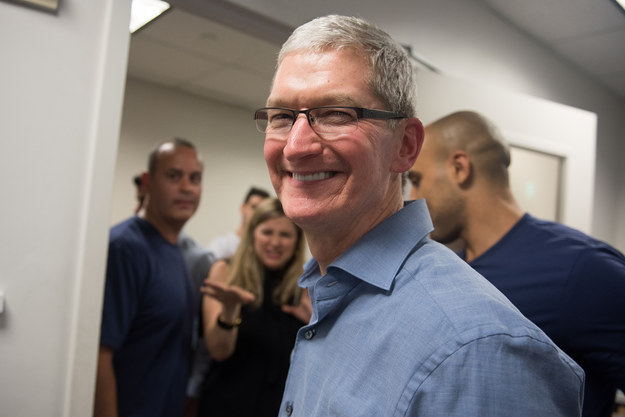 Tim Cook likes to do to surprise visits to Apple Stores and following last week’s media event, Buzzfeed joined him on a 20-minute car ride to ask the CEO various questions regarding privacy, Siri, Apple’s pre-installed apps and more.

Apple has already addressed some of the privacy issues raised by the always-on Siri. You may recall that Apple highlighted that as an iPhone 6s feature, you can finally wake up Siri without pressing the Home button. Now all you need to say is “Hey Siri”. This is where privacy concerns arise. Here is Tim Cook’s take on this:

“First you can decide you don’t want Hey Siri,” Cook responds. “But the real answer to that is that the information is held on the device and so it is not going back to Apple. Apple doesn’t have access to it. So there’s not privacy concerns I think, for most people, when the information is held on their device and they can encrypt it with their passcode.”
“Hopefully people will look at our stance on privacy in general and know that we’re not trying to operate outside of a fairly distinct line that we’re drawing,” Cook elaborates. “I hope that people trust us to do the right thing there.”

During the short interview, Cook also talked about the new features Apple introduced, such as Live Photos. According to John Paczkowsi, he described “Live Photos with near Jobsian hyperbole”, stating that it is medium that hasn’t existed before. However, despite this, it appears he’s most excited by 3D Touch (you know, the thing that makes iPhones 11% heavier compared to last year’s models).

Of course, one of the problems that Apple will need to finally address is the pre-installed apps. Currently you can’t remove them (think Tips and Stocks for example). Fortunately, this is a matter the company is working on, according to Cook:

This is a more complex issue than it first appears,” he says. “There are some apps that are linked to something else on the iPhone. If they were to be removed they might cause issues elsewhere on the phone. There are other apps that aren’t like that. So over time, I think with the ones that aren’t like that, we’ll figure out a way [for you to remove them]. … It’s not that we want to suck up your real estate, we’re not motivated to do that. We want you to be happy. So I recognize that some people want to do this, and it’s something we’re looking at.”

The whole interview is well worth your time, so head over to Buzzfeed to read it in full.

Apple yesterday released new software betas for developers including iOS 16.2 beta 4, with a release of the public beta beginning shortly thereafter. The latest iOS 16.2 beta release brings a handful of feature updates and changes, such as new controls for the Always-on display on iPhone 14 Pro and Pro Max devices, updates to Shortcuts,...
Usman Qureshi
18 mins ago