Apple: Most Valuable Brand in the World 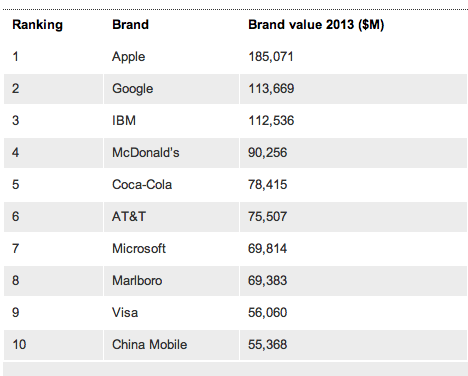 A balance of local and global strength, diversified business areas, and strong corporate brand are some of Apple Inc.’s features that have pushed it to the top of the world’s most valuable brands, according to Millward Brown Optimor’s annual BrandZ list (via 9to5mac).

Apple topped this year’s list due to the strength of its brand, valued at $185 billion, although its rate of growth has slowed by 95% because of a slip in stock price and negative investor sentiment. However, as global BrandZ director Peter Walshe points out, the most powerful brands don’t tend to slip as much, while the finances go up and down (see Apple’s stock price).

Apple maintains its top slot in the rankings this year because of the strength of its brand, with a value of $185.1bn. However, its rate of growth has slowed by 95 per cent due to a slip in stock price and negative investor sentiment.

“Its brand value only increased by 1 per cent this year but it still holds the record for the most valuable brand. And it leads by a long way. The next brand in the ranking, Google, is worth $113.7bn [reversing a 3 per cent decline last year to a 5 per cent gain] so Apple is $71.4bn ahead – nearly the value of Coca-Cola, which just shows how strong, powerful and meaningful that brand is,” explains Walshe.

Millward Brown Optimor creates the BrandZ Top 100 global brands list from 14 categories, stretching over five sectors: consumer, food and drink, financial institutions, technology and commodities. A brand’s value is calculated by taking the financial value created by the corporation and multiplying it by the brand contribution, the company explains.