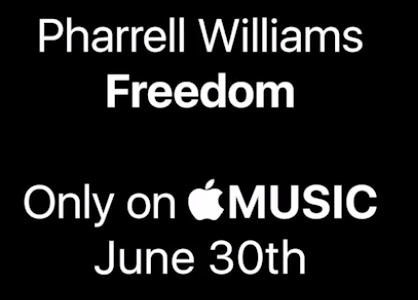 Pharrell Williams took to Twitter and Facebook to announce his new single “Freedom” will debut on Apple Music when the service launches in six days. A 15-second teaser of the song was posted to Twitter and his Facebook page:

If the track sounds familiar, it was used within Apple’s ‘Worldwide’ promo trailer for Apple Music, which debuted at WWDC earlier this month. We all knew it was Pharrell at the time, but now we know what the song is. Take another listen:

Pharrell worked with Apple before when he showed off his custom gold Apple Watch with pink sport band on Instagram, which was also seen widely on TV on The Voice, which Williams stars in.

Apple Music sponsored ads have been widely seen on Facebook in Canada, while iOS 8.4 and iOS 9 beta users have also seen the service’s landing pages appear ahead of the launch. Pricing for Apple Music is set at $9.99 USD per month and $14.99 USD respectively for individual and family plans. Canadian pricing has not been announced yet, but Apple Music showing up in iOS betas list the same prices.