Following Bloomberg’s report on Apple Music’s upcoming redesign coming at WWDC, Mark Gurman from 9to5Mac has just posted details on what he’s hearing from sources regarding new changes for the music service. 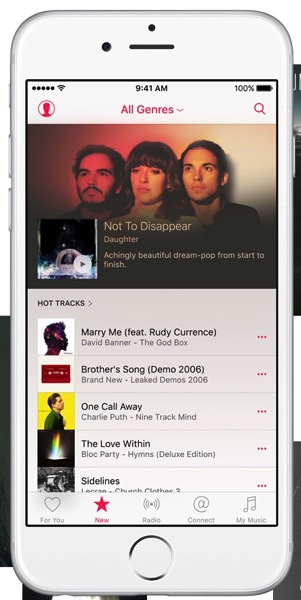 According to Gurman, the new version of Apple Music has been planned since the end of last year, with major work beginning at the end of February. As for the new user interface?

The new user-interface ditches the current colorful and translucent look in favor of a simpler design that emphasizes black and white backgrounds and text.

An example of where these changes will impact will be albums, as artwork is said to become “huge”. The new emphasis on artwork, says one source will make the service look “bolder, yet simpler.”

The Apple Music interface will gain more 3D Touch enhancements for shortcut previews and to easily share songs. The social Connect feature does not look like it will change this year.

The “For You” tab will be simplified to encourage wider use of the discovery feature, which will apparently use the similar algorithms as Apple Music’s recommendations engine. The “New” tab is set to disappear and be replaced with a “Browse” tab.

Apple is also planning to add lyrics to Apple Music, with a “good amount” songs set for its gradual launch.

Other changes will include more use of Apple’s San Francisco font, with bold black text for menus and tabs. The font will also reportedly be widely integrated into all of the company’s apps, operating systems, websites and online services, note sources.

The new Apple Music changes will be previewed at WWDC set later this June, and released later in the fall with iOS 10, codenamed “Whitetail.”