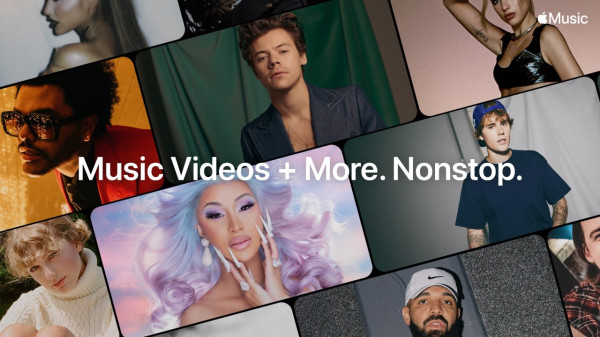 According to Variety, the channel, which will be housed under the Browse tab within the Apple Music app and will be available on Apple TV, will be in front of the service’s paywall, and will live stream music videos, as well as some short-form and long-form videos and interviews from within its Apple Music 1 radio infrastructure as well.

It will also be a place where new music videos are premiered, with the first premieres coming this Friday, October 23 with Joji’s “777” and SAINt JHN’s “Gorgeous.” At launch, Apple Music TV will be available only in the U.S.

“A great list of sampled artists on a typical day would be Drake, Dua Lipa, BTS, Billie Eilish — a contemporary mix of current hits,” says Rachel Newman, Apple Music’s global head of editorial and content. “It’s such a great way for music lovers to see big, contemporary hits in an easy-to-consume, lean-back way and be able to access Apple Music from the TV app at the flick of a switch.”

Beginning today, Apple Music TV will launch with a countdown of music videos of the top 100 most-streamed songs in the US on Apple Music since its mid-2015 launch.

Apple Music TV will also allow the service a home for special events. This Thursday, for example, Apple Music TV will have a 24-hour takeover for Bruce Springsteen in advance of the release of his new album, Letter To You, that will feature Springsteen music videos, live concert footage, a sit-down interview with Apple Music 1 host Zane Lowe, and a live-streamed fan event where 1,000 fans will be able to ask Springsteen questions and get a first listen to the album ahead of its release at midnight EST Thursday night.

Viewers can watch Apple Music TV in the Browse app of both the Music and TV apps on their devices.

Citing people familiar with the matter, a Bloomberg Law report is claiming that Hollywood super-agent Ari Emanuel has attempted to pave the way for a settlement between Elon Musk and Twitter in their $44 billion takeover deal. Sources said that Emanuel contacted Twitter board member Egon Durban and suggested the two sides find a solution...
Usman Qureshi
46 mins ago

Xplore, formerly known as Xplornet, has just announced the launch of its fibre broadband internet service in Quebec, with plans to be offered including download and upload speeds up to 1 Gbps and truly unlimited data. Xplore’s latest fibre-to-the-premise network expansion will connect approximately 6,000 homes and businesses in communities around Val-des-Sources, the MRC Papineau, and...
Usman Qureshi
60 mins ago