A new Apple patent published today by the U.S. Patent and Trademark Office (USPTO) has revealed a new, shrunken-down “D-shaped” headphone connector, which Apple may use to replace the existing 3.5mm jack in future iPhones with an even slimmer profile, AppleInsider is reporting. The patent filing notes that the “improved” headphone connector would sport all the functionality of a modern 3.5mm TRRS (tip, ring, ring, sleeve) connector, but with a trim profile for much thinner devices. 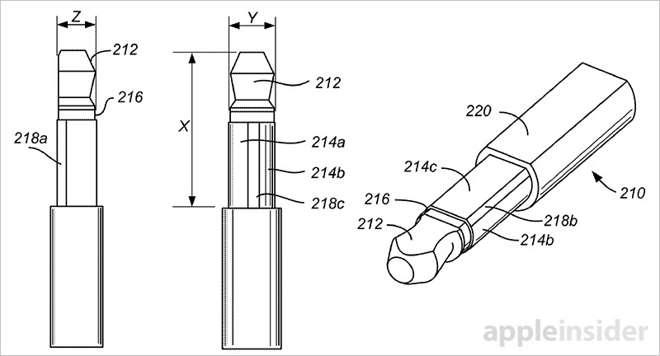 Apple’s “D” profile headphone plug is flat on one side, which is said to act as a “keyed feature”, which means it restricts insertion to a matching D-shaped cavity. One of the embodiments specifies a diameter of 2.0mm from the plug’s flat portion to its opposite edge, which is significantly thinner than current connectors. Whether Apple’s new headphone jack standard leads to the demise of the current 3.5mm plug or not, only time will tell.

“For a fairly sensitive electronic part, the headphone connector is constantly exposed to mechanical strain. A flexible elastomer or similar material could help cut down on breakage from repeated insertion and extraction operations.

On the device side, Apple describes a D-shaped receptacle protecting an internal mechanism designed to capture the plug, much like regular jacks. The system can be mechanical or magnetic, while some embodiments allow for a spring-loaded ground contact that doubles as a retention feature”.

Apple’s D-shaped connector patent was first filed for in May 2011.

The Dyson V12 Detect Slim makes some significant quality of life improvements while not compromising on power. I’ve been using Dyson vacuums for the better part of three years. Across many of its previous cordless devices, I’ve been thoroughly impressed. Dyson typically delivers when it comes to power and suction. Plus, I’ve often found battery...
Steve Vegvari
57 mins ago