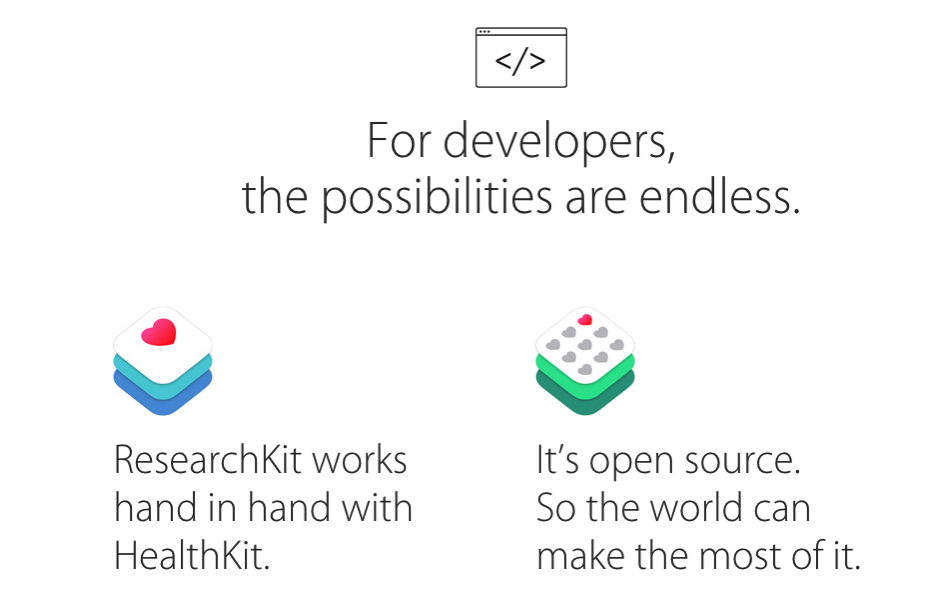 “We’re honoured to work with world-class medical institutions and to be able to provide them with tools which ultimately might help our customers lead healthier lives,” said Jeff Williams, Apple’s senior vice president of Operations. “In just six months, ResearchKit apps studying everything from asthma and diabetes to Parkinson’s disease, are already providing insights to scientists around the world and more than 100,000 participants are choosing to contribute their data to advance science and medical research.”

Since its launch in 2014, ResearchKit has been used by several of the world’s leading medical institutions to gain insights into some of the most serious diseases, such as Parkinson’s, diabetes, breast cancer, and cardiovascular disease.

On the microsite dedicated to ResearchKit, Apple promotes the iPhone as a powerful medical tool, as it is already equipped with powerful processors and advanced sensors to track movement, take measurements, and record information – and those functions are a good fit for medical studies. ResearchKit is actually an open-source framework that enables developers and researchers to create apps, such as Asthma Health, developed by Mount Sinai, Weill Cornell Medical College, and LifeMap, an app that helps participants self-manage their asthma, and since the study tracks symptom patterns in individuals, researchers hope to discover new ways to personalize treatment.

In just six months, more than 50 researchers have contributed active tasks to support new methods of research, including tasks to study tone audiometry for hearing loss; the ability to measure reaction time through delivery of a known stimulus to a known response; a timed walk test; PSAT to assess the speed of information processing and working memory, and the mathematical puzzle Tower of Hanoi often used for cognition studies. Additional contributions to the ResearchKit framework include iPad support, image capture and the ability to add pie charts, line graphs and discrete graphs for more detailed dashboards.

With user permission, researchers designing studies using ResearchKit can access data from the Health app, such as weight, blood pressure, glucose levels, and other data measured by third-party devices and apps, to capture real-time data right from the iPhone. Access to the accelerometer, microphone, gyroscope, and GPS sensors in the iPhone deliver additional insight into a participant’s gait, motor impairment, fitness, speech, and memory, delivering more objective data to medical researchers.