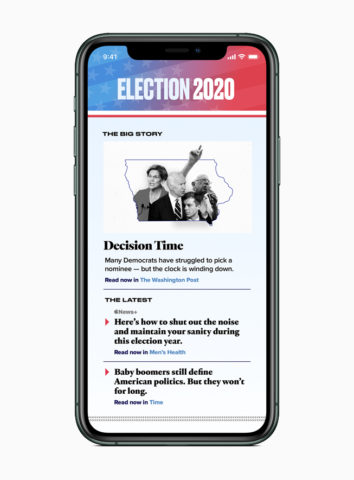 Apple has once again begun adding special coverage of the presidential election to Apple News. Like it has done for past US elections, the Apple News app now features curated guides, news, and up to date data.

In a press release, Apple announced that it will be working with outlets such as ABC News, CBS News, CNN, FiveThirtyEight, Fox News, NBC News, ProPublica, Reuters, The Los Angeles Times, The New York Times, The Wall Street Journal, The Washington Post, TIME, USA Today and others to provide the most accurate and comprehensive coverage on the elections.

The Apple News 2020 coverage will include a series of relevant guides, features, and other resources created by the editorial team working to keep up to date news filtering through the app. Both sides of the political spectrum will find a convenient place to read through the latest issues and moments during the election.

Coverage will also delve into the largest election moments including debates, Super Tuesday, Democratic and Republican conventions. Real-time data will be used to track and update results during each primary and provide county-by-county results. Map tracking will provide an up to date look at candidate wins. Coverage will span all the way through to election night and last until the presidential inauguration in 2021.

Apple has partnered with ABC News and will livestream the New Hampshire debate on February 7th. The debate will be accessible on iPhone, iPad, Apple TV, iPod touch, Mac, select Samsung LG smart TVs, and Amazon Fire TV and Roku devices. Apple News will also feature streams and moment-to-moment analysis from FiveThirtyEight as it is providing polling data and infographics.

The election coverage is available now to Apple News users in the US on iPhone, iPad, and Mac.