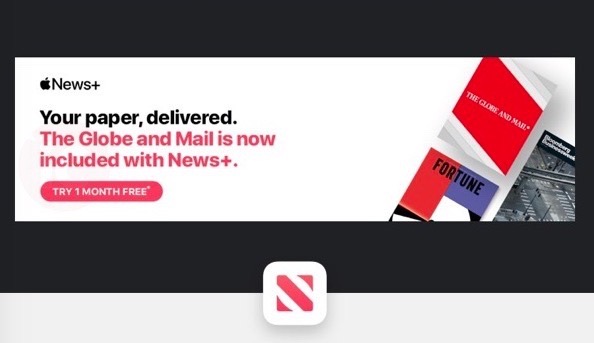 Apple News+, the premium version of the newspaper and magazine app, costs $12.99 per month in Canada. Leading newspapers with a paid subscription include the Toronto Star, Wall Street Journal and now The Globe and Mail.

Apple has yet to update its Canadian website to indicate the addition of The Globe and Mail as one of its “leading newspapers” inside Apple News+, as only the Toronto Star and Wall Street Journal are listed.

“The confidential agreement provides for the sharing of monthly subscription revenues between Apple and Le Devoir, depending on the commitment, i.e. the minutes devoted to viewing Le Devoir’s content by Apple News + subscribers. Advertising revenue generated in the News + format will also be shared, using a different calculation method,” said Le Devoir (Google Translated) during the first week of July.

Le Devoir normally charges $17 per month for its digital subscription, while The Globe and Mail costs $16.66 per month (if you buy a 1-year gift subscription). Considering Apple News+ costs $12.99 per month in Canada and also includes a vast selection of digital magazines, it’s not a bad deal compared to paying standalone retail prices (especially if you’re paying using discounted iTunes cards from Costco).

Apple News+ launched back in March 2019 to much fanfare from publishers, hoping the platform would help improve diminishing revenues due to the decline of paper newspapers. However, some publishers have not been happy with Apple News+, complaining of lower than expected returns from being part of the service. One prominent loss was when The New York Times ditched Apple News back in June.

Are you a current subscriber to Apple News+?