One of the most interesting things in the first beta of iOS 10.3 released earlier this week is that it includes an option for users to share their iCloud data with Apple. This will help the company improve products such as Siri, and other similar or related services, TechCrunch notes. 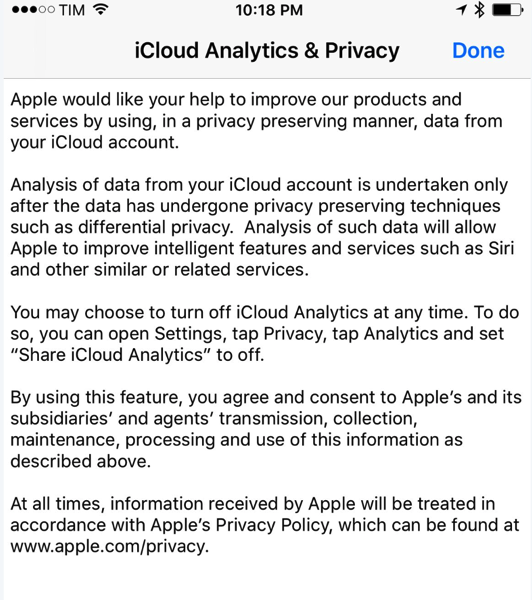 The change was spotted under the heading “iCloud Analytics & Privacy”, and says analysis of data taken from the user’s iCloud account is “undertaken only after the data has undergone privacy preserving techniques such as differential privacy.” You may recall that Apple exec Craig Federighi has used this phrase to describe the new direction the company is taking to improve overall user experience by collecting data based on strict rules defined by users.

Apple has been far behind other companies such as Google in data mining, a policy that has prevented it from advancing its AI efforts, as we reported earlier. Fact is, Apple has been known for its strict user privacy policy. That has changed somewhat with the latest version of their software.

Federighi compared the results of data collected based on differential privacy principles to “crowdsourced learning”. As TechCrunch notes, there is no available data on how successful this has so far been.

However, with the latest step it seems as though Apple is after more of your data through its cloud storage and back-up service, iCloud, which may suggest it is after improving iCloud itself. On the other hand, improvements in Siri would be more than welcome, so this could possibly serve as a method to improve the performance of the virtual private assistant, TechCrunch suggests.

Data sharing is optional, and users can opt out at any time, Apple says.