Apple’s engineers have been busy lately developing a new zoom lens system for the iPhone. Patently Apple has spotted a new patent for a “Mobile Camera System” published by the US Patent and Trademark Office which documents a new dual camera zoom lens system, an invention that will potentially provide optical zoom to a user. 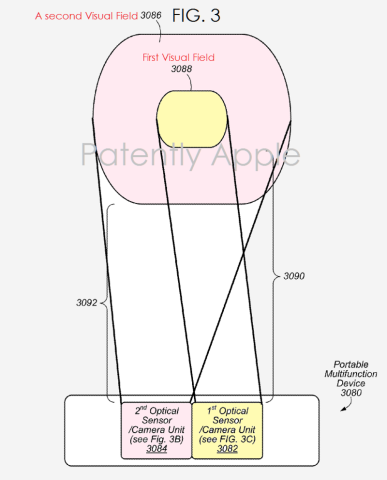 As you can see from the above image, Apple envisages a system composed of two camera modules behind the lens, allowing the user to switch between two different focal lengths, as in some embodiments the focal lengths of the two camera units differ.

The patent description goes on to postulate some case scenarios:

A use case for some embodiments is well-illustrated with respect to sports photography. In one example use case, it is possible to imagine a user of portable multifunction device 3080 filming a batter in a baseball game. Recording video of the game with portable multifunction device 3080 from bleachers, not shown, a user may decide to zoom in to capture a batter swinging and hitting the ball in slow motion using second camera module 3084 recording 720p slow motion video at 240 frames per second, but may subsequently want to switch to the simultaneously captured 4K video from first camera module 3082 at 30 frames per second of resulting home run in high quality video of the full baseball field, to capture the moments where the opposing team scrambles to catch the ball and the batter is running from base to base. Some embodiments enable this mixed-video capture by simultaneously recording using second camera module 3084 as a telephoto camera module in a 240 frames per second slow motion mode while at the same time using first camera module 3082 as a wide camera module in a 4K at 30 frames per second. After capturing a data structure including both video streams the awesome moment, some embodiments provide for a mixed-video data structure and an interface for the video streams from the two separate camera modules to be manually or automatically edited and combined to create a more engaging media which may contain normal 1080p video, 4K high resolution video, 720p motion video, and still images. In the example described above, this mixed-video media both captures the close up expressions of players, the peak action in slow motion, and frames it all in the context of a great play in a baseball game.

This isn’t the first patent related to a new zoom-lens system, so this seems to a be field Apple is highly interested in, and we will likely see this materialize in some form in future iDevices.