Back in November, the U.S. Patent and Trademark Office (USPTO) granted Apple an iPhone design patent titled “Flexible display devices”, detailing an iPhone with a foldable metal-backed OLED display. Now, the folks over at Patently Apple have uncovered another Apple invention that illustrates a dual fold-out / fold-in form factor. The above patent figure clearly shows a future iPhone or and iPad Mini that could be folded out or in. 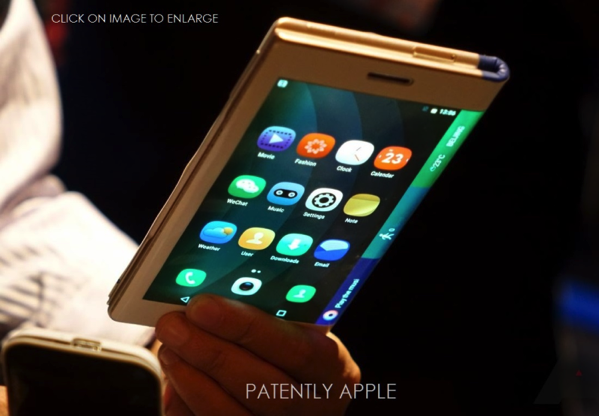 The invention is based on a display with flexible encapsulation, which may bend about a bend axis when portions of a housing for the electronic device rotate with respect to each other. A flexible encapsulation layer may be used to encapsulate and protect OLED and thin-film transistor layer of the flexible display. Furthermore, an inorganic conformal coating layer may coat the lateral diffusion layer and may serve as a pinhole filling layer.

The pinhole filling layer may be deposited using atomic layer deposition. By coating and smoothing particles on the lateral diffusion (dispersion) layer, the particles will not damage the encapsulation layer. The pinhole filling layer may be covered with a moisture barrier layer that serves to prevent moisture from penetrating the display. The moisture barrier layer may have one or more layers of material such as inorganic material that blocks moisture.

A polymer protective layer may cover the moisture barrier layer and may be relatively insensitive to bending induced stress as the display is flexed.

Apple’s folding device patent may also apply to MacBooks, as well as Apple Watch and other portable electronic devices.

Citing unnamed sources and internal documents, CNBC is reporting that Google is testing new AI-powered chat products to compete with OpenAI’s ChatGPT. Google is said to be testing a ChatGPT-like chatbot called 'Apprentice Bard,’ which uses the company's LaMDA technology. The said chatbot is being tested by Google employees, who ask the bot questions and receive...
Usman Qureshi
47 mins ago