According to PatentlyApple, the US Patent & Trademark Office (USPTO) has published a new patent application from Apple today, that reveals a new and unique anti-counterfeiting solution for company’s future hardware, including iOS devices as well as the MacBook Pro. The invention will utilize a “3D variable depth coding system” on various parts of products that could either be visible or invisible to the naked eye. 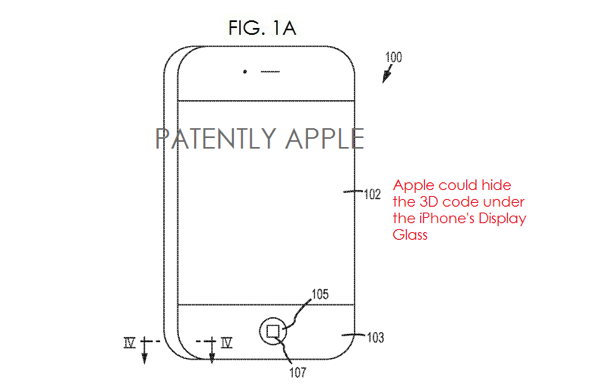 The filing notes that the 3-D codes may be provided on electronic device housings to help track the device during and/or after manufacture. One particular use of the 3-D codes is to help identify counterfeit products, as only authentic products may have a proper 3-D code. Counterfeit products may be detected based on the coding of the varied depth of the code elements. In some embodiments, the code may not be detectable or at least not easily visible to the naked, human eye.

In Apple’s patent FIG. 1A we see an example iPhone in which the 3-D coding may be integrated directly into the cover glass 102 or under the cover glass. In one example, the code may be located under an ink coated portion 103 of the cover glass to obscure the code.”

Whether Apple has gone to the trouble of inventing such a sophisticated system to combat current or future Black Market activity is unknown at this time.