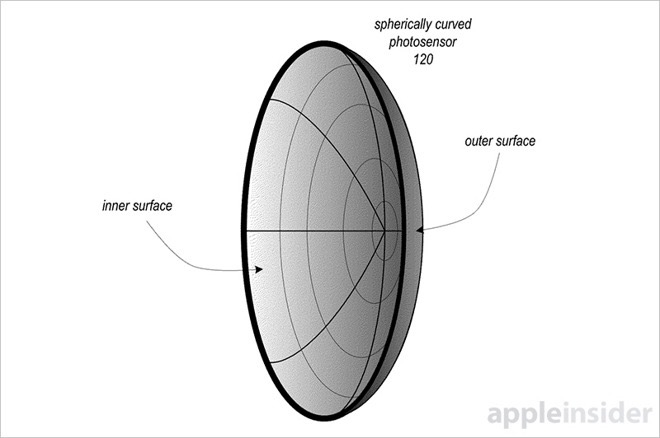 Apple’s patent details a spherically curved photosensor that receives incoming light, refracted through special lenses onto a concave surface. In order to fix diffraction and visual aberrations that propagate within small cameras, the proposed lens system includes three lenses, two of which are substantially convex.

A third meniscus lens, or a lens with opposing convex and concave surfaces, is situated between the first two lens elements and the spherical photosensor.

This unique arrangement provides a comparatively small ray fan spot size for all field heights at the image plane, allowing for sharp, low-distortion images. Apple says that employing a curved array limits diffraction across the image field (it scores high in point spread function and modulation transfer function metrics), thereby allowing for a smaller photosensor with equally tiny pixels. Further, with an axial length of two millimeters or less, the total camera package is incredibly compact.

The setup does come with a few drawbacks, however, the most prominent being native barrel distortion, or a bubble-like warping. Apple proposes a software solution for correcting such unwanted effects.

Apple’s curved spherical photosensor patent was first filed for in 2013.

According to MacRumors, there is a microphone issue plaguing some Apple Watch Ultra and Apple Watch Series 8 units. Users have reported an issue where they are unable to use Apple Watch's microphone to talk to Siri, make a phone call, record voice memos, and more. The microphone simply becomes unresponsive after some time, rendering it...
Nehal Malik
5 mins ago