A survey of the global payment market suggests future growth will be driven by contactless cards.

According to new data from Juniper Research, OEM Pay services like Google Pay, Apple Pay, and Samsung Pay, will reach 450 million payments by 2020, with Apple accounting for half of all OEM payments globally.

Juniper says the combined market share of Apple, Samsung and Google will reach 60% of global mobile contactless users by 2023, up from an estimated 50% in 2018. Other mobile pay users — including Huawei Pay, Xiaomi Pay, Fitbit Pay and Garmin Pay — will exceed 20 million by 2020.

“We believe that growth over the next five years will continue to be dominated by offerings from the major OEM players,” said the research’s author Nitin Bhas, referring to companies like Apple, Google, and Samsung. “Additionally, we now have the likes of Huawei Pay and Fitbit Pay launching in several markets; this is now included in Juniper’s contactless forecasts,” he noted. 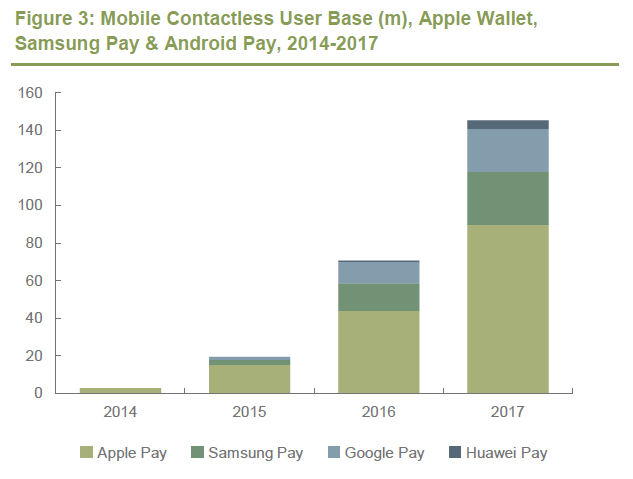 While contactless payments use has risen rapidly, Juniper argues that this does not mean higher growth for mobile contactless payments. In many established markets, contactless cards remain the most likely to have increased current and future usage by consumers, and OEM Pay options may struggle to gain traction amongst existing users in such markets.

The research claims, however, that contactless payment transactions, conducted across all types of payment cards, mobile, and wearable devices, will reach $1 trillion USD in value this year, a year earlier than previously anticipated