Apple Pencils Being Stolen from Apple Stores, Employees Not Bothered [u]

According to several different reports across the web, a number of people have been stealing the Apple Pencil stylus for the new iPad Pro at Apple’s Retails Stores, whereas the store employees aren’t making any efforts to stop them either (via BusinessInsider). The Apple Pencil is already quite hard to find both in-stores and online, with estimated shipping times slipping to 4 or 5 weeks in the US and Canada. 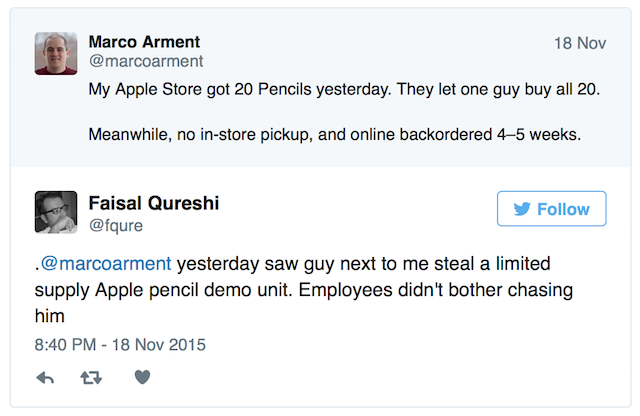 Similarly, a Reddit user IMPRNTD said that “[m]y local store in Canada mentioned that most of the Apple Pencils were stolen.” The user reportedly had a go with a Pencil and then had to find an employee to give it back, fearing it would be stolen. “I walked up to one of the greeters and had to get their attention to return it,” they write. “I could have easily just walked out with it.”

Apple is yet to officially comment on the matter.

Correction: Earlier it was mentioned Marco Arment detailed an Apple Pencil theft, but rather it was a follower that mentioned it.