It’s no secret Apple has been exploring a self-driving vehicle, but now the California Department of Motor Vehicles (DMV) has confirmed it’s getting real. An update to the DMV website now lists Apple as a company which has been issued an Autonomous Vehicle Testing Permit (via Business Insider): 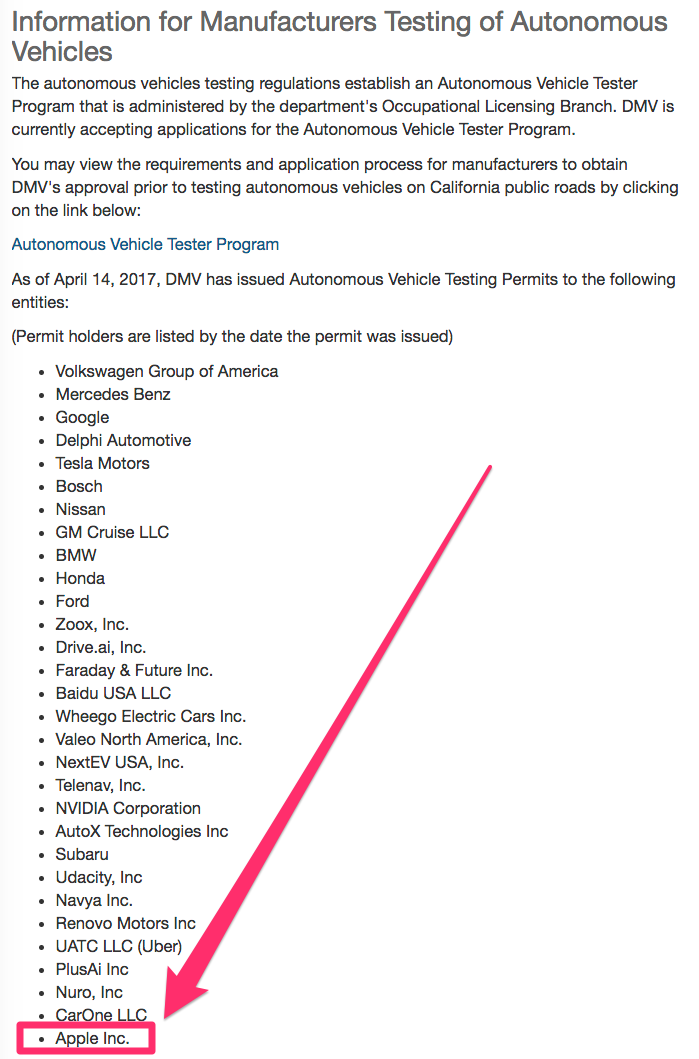 Apple declined to comment on the matter to BI, but referred to a previous statement they are “investing heavily in machine learning and autonomous systems.”

The company’s so-called ‘Project Titan’ was described in 2015 as having “several hundreds” of employees working on a self-driving electric car. But last year, it was reported Apple had scaled back the project, with management reportedly changing the focus to autonomous driving software instead of a standalone vehicle.

At least year’s annual shareholder meeting, CEO Tim Cook responded when probed about they company’s rumoured electric vehicle ambitions, saying “Do you remember when you were a kid, and Christmas Eve, it was so exciting, you weren’t sure what was going to be downstairs? Well, it’s going to be Christmas Eve for a while.”

The biggest player in the autonomous driving space is Tesla right now, and I can’t see anyone catching up to them. CEO Elon Musk announced yesterday a new semi truck is coming, while also confirmed the final reveal for the Model 3 is slated for July. Should Apple just buy Tesla already?

WhatsApp has announced a new feature that allows users to create and send a call or chat link to anyone on WhatsApp, even if they’re not in your contacts. The company shared the news in a tweet posted earlier today, suggesting that you can simply add the link to an invite or send in a...
Usman Qureshi
12 mins ago

As noted by the folks over at MacRumors, the latest iOS 16.1 update brings live sports scores and other real-time activities to iPhone 14 Pro’s Dynamic Island. For those who haven’t upgraded to iOS 16.1 yet, it introduces a new Live Activities feature that allows iPhone users to keep tabs on are happening in real-time,...
Usman Qureshi
24 mins ago

India is pushing smartphone manufacturers to support its proprietary navigation system, Navigation with Indian Constellation (NavIC), on all new smartphones sold in the region by January 2023. However, Apple and other smartphone makers are concerned about the added cost and components of making the change — reports Reuters. NavIC is India's own alternative to the widely...
Nehal Malik
25 mins ago