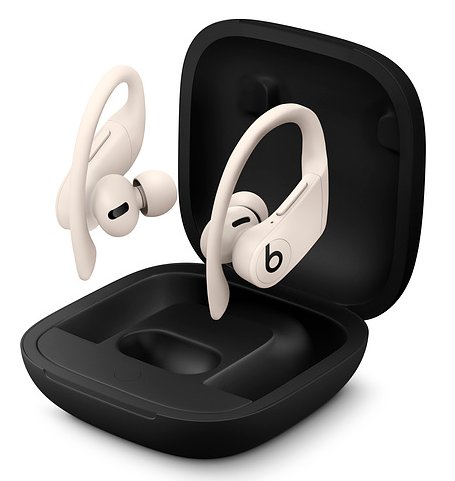 Apple’s latest Powerbeats Pro wireless headphones launched pre-orders this week at $329.95 in Canada, set for a May 10th launch at Apple Stores.

These new wireless headphones are powered by the new H1 chip found in second-generation AirPods, geared towards fitness and sport, with always-on “Hey Siri” available.

While Apple’s website does not indicate the water resistance rating of Powerbeats Pro, the reviewer’s guide sent to media reveals it’s at IPX4, which means it can resist splashing water. The next rating up, IPX5, can resist water jets from a 6.3mm nozzle.

The Powerbeats Pro reviewers guide—at 8 pages total—notes this fact on page three detailing the ‘Design & Fit’ of the wireless headphones, under sub-section “Designed for Sport”.

“Sweat and water resistant design held to Apple standards of quality and validation IPX4 water resistance rating,” reads the description. The Powerbeats Pro should have no issue resisting your perspiration and water splashing from your workouts.

You can click here to pre-order your Powerbeats Pro wireless headphones—they launch this Friday, May 10th.

Below is a comparison of the new Powerbeats Pro versus AirPods 2 from Canadian YouTuber Justin Tse: