Apple Announces Powerbeats Pro Headphones Priced at $329.95 in Canada [u]

After hints from iOS 12.2 suggested new ‘Powerbeats Pro’ wireless headphones were coming, Apple made the announcement official today in a press release.

New Beats by Dre Powerbeats Pro will launch in May in numerous countries including Canada, priced at $329.95.

Powerbeats Pro headphones were “completely re-engineered from the inside out, the earphones boast an upgraded linear piston driver that leverages an efficient, pressurized airflow to create a powerful acoustic response in a small package.”

Apple says they tested over 20 configurations of ears to find the best fit with Powerbeats Pro and its ear hooks. The wireless headphones come with four sizes of ear tips and the redesigned ear hooks are adjustable.

“Powerbeats Pro is a harmonious blend of premium sound, fit and functionality. Powerbeats are already the #1 fitness headphones in the world and they are now untethered, with all the benefits of the Apple H1 chip,” said Luke Wood, president of Beats, in a statement. “No longer do you have to choose between performance and practicality—it delivers the best on both fronts.” 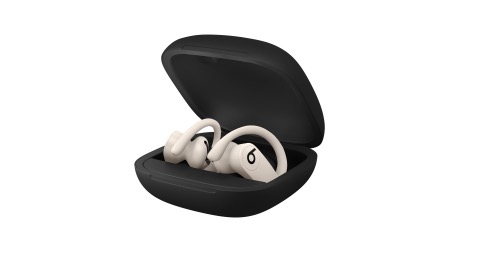 The new Powerbeats Pro are 23 percent smaller and 17 percent lighter versus the older version, plus sweat and water resistant.

They are also powered by the new H1 chip found in Apple’s second-generation AirPods and support always on “Hey Siri”.

Each earbud has physical volume and track controls, while new for 2019 is the inclusion of a “speech-detecting accelerometer in each earbud and two beam-forming microphones per side target your voice and filter out external sounds such as wind and ambient noise,” making Powerbeats Pro perfect for phone calls too.

Powerbeats Pro act like AirPods, with no power button. They turn on and off automatically when taken out of the charging case and go into sleep mode when not in use. The wireless headphones also pair like AirPods, just by opening the magnetic charging case.

The headphones have Class 1 Bluetooth and each earbud connects independently to your devices, so you can use one or both.

Powerbeats Pro will be available in four colours: Black, Ivory, Moss and Navy and also support Android. Expect them soon on Apple.ca in May. With U.S. pricing pegged at $250,

The Verge went hands-on with Powerbeats Pro and said the case does not support wireless charging and the fit and sound of the new wireless headphones were decent.