Apple’s System Status page has indicated there is an “upcoming maintenance” period scheduled for Tuesday, March 21, from midnight PDT to 5:30AM PDT (3AM EDT to 8:30AM EDT), leading to speculation we could see new products by tomorrow, notes MacRumors. 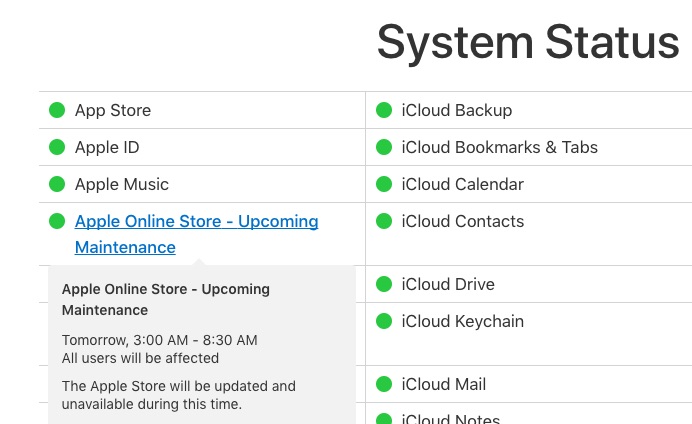 There also is a scheduled update for Photo Prints Products at this time.

Normally when the Apple Store online goes down, people freak out as they expect new products or changes to appear in the store. With Apple rumoured to launch new products this week, which could come in the form of new iPads, such as updated 9.7-inch and 12.9-inch Pro models, and a new 10.5-inch model.

If Apple were to announce a new 10.5-inch iPad model, many would suspect the unveiling would take place at an event, instead of a quiet press release.

Previous rumours have suggested we could see new iPhone SE with 128GB, a red iPhone 7 colour option and refreshed Apple Watch bands at a March event. But as we near the end of the month, it doesn’t look like there will be an event as Apple usually gives attending press notice before one takes place.

What do you think? Will we see new products in March? Or will Apple push the announcements to April in time for its launch of Apple Park?