Earlier today, it was reported how Apple has criticized EU draft rules, which would force the company to allow users to install apps from outside its App Store. To further defend its position, Apple has published a new paper (.PDF) on sideloading apps (via ZDNet). 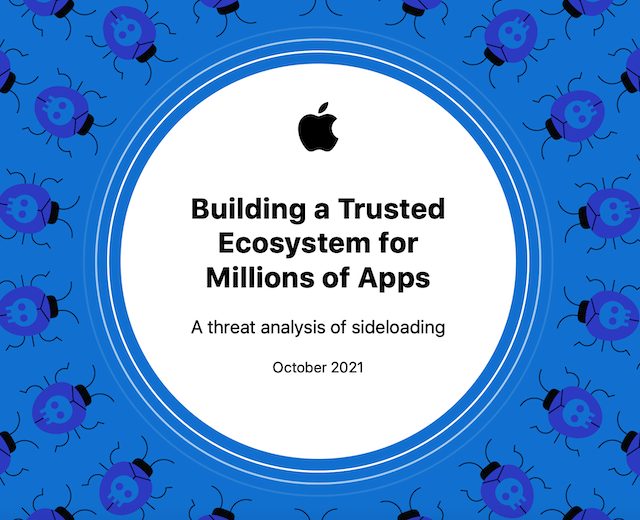 For those who aren’t familiar, sideloading is a process allowed by other mobile OS developers, such as Google, to install apps on devices outside of official app stores. While the process may be helpful when users want access to software that is not available in official stores, it involves serious security risks.

Earlier this year, Tim Cook claimed that sideloading was not in the best interests of Apple product users, and reviewing all apps introduced into the ecosystem keeps mobile malware rates low.

According to Apple’s research paper, “Building a Trusted Ecosystem for Millions of Apps: A threat analysis of sideloading,” there are far more malware infections on Android-based devices than on iPhones.

“Mobile malware and the resulting security and privacy threats are increasingly common and predominantly present on platforms that allow sideloading,” Apple says.

There are a number of ways that malware can reach a handset. On occasion, malicious apps can circumvent existing protections in an official app repository; but more commonly, apps can be spread through phishing, masquerading as legitimate software or OS updates, and website spoofing.

The paper has been published in light of discussions in Europe concerning the Digital Services Act (DSA) and the Digital Markets Act (DMA).