Earlier today Apple revealed their Q2 2014 earnings, which saw 43.7 million iPhones sold, exceeding the expectations of Wall Street. The company also increased their stock buyback program to over $130 billion, on top of announcing a 7 for 1 stock split; all this drove the stock up around 8% in after hours trading.

In the earnings call, let’s take a look at some of the numbers and other gems mentioned by Apple CEO Tim Cook, as per this transcript via MorningStar:

Here’s a chart of Apple’s revenue per quarter, via MacStories: 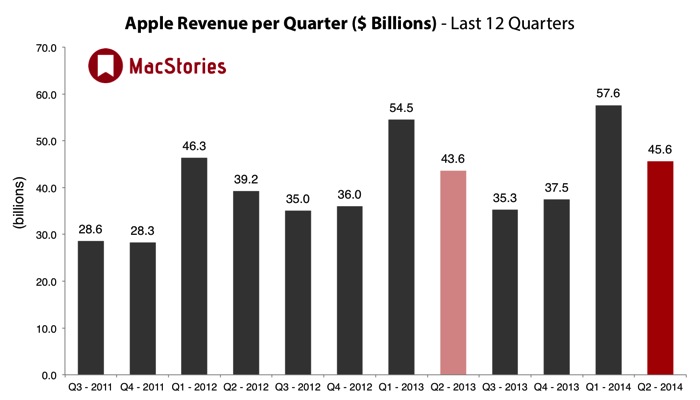 As you can see from the chart, the numbers don’t lie—Apple isn’t doomed, but revenue continues to grow, albeit at a slower pace than before (they still have $150.6 billion in cash lying around). Tim Cook has set the stage for Apple’s new products to arrive this year, which also brings expectations of what’s to come.

We can assume we’ll see the iPhone 6, refreshed iPads, refreshed Macs (thinner 12-inch MacBook Air?) and maybe a new iPod touch (although we haven’t heard any solid leaks—yet), plus previews of iOS 8 and OS X. The wildcards are whether we’ll see an iWatch or some sort of Apple Television. We’ll have to wait and see.