According to new data from Counterpoint Research explains that Samsung retained the number one spot with shipments reaching 58 million units in Q2 2021. However, its market share declined to 18 percent as compared to 22 percent in Q1 2021 as its shipments declined by 24 percent quarter-over-quarter.

Xiaomi eclipsed 50 million smartphones, becoming the world’s second-largest smartphone brand for the first time. “Xiaomi had its best-ever quarter as it was able to increase its market share in China, Southeast Asia and Europe,” said Tarun Pathak, OEM rankings, Research Director, in a statement.

Xiaomi recorded quarter-over-quarter shipment growth of 8 percent while its shipments grew by a staggering 98 percent year-over-year. 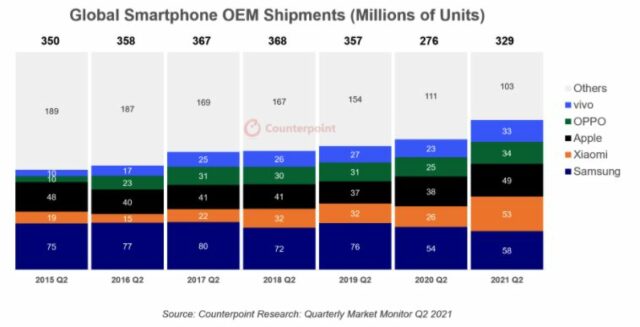 “While Apple fell to the third spot, it captured record second-quarter shipments thanks to persistent demand and supply for its iPhone 12 series,” Pathak said.

Apple announced its Q2 2021 revenues earlier this week. The company reported revenues of $81.4 billion with a profit of $21.7 billion.

The demand for the iPhone 12 series continued to remain high. Apple also ensured its supply was not affected by the semiconductor shortage thanks to the strong ties with its suppliers. Thanks to the robust iPhone 12 demand, Apple saw its revenue increase by 52 percent from the same time last year.

Among other major OEMs, OnePlus, realme, and Lenovo Group grew the fastest.