Update: This post has been updated to indicate that iTunes Match is only available in the US.

This morning Apple has released iTunes 10.5.1 that adds the long awaited iTunes Match (U.S. Only) and a few other goodies. The update is available via Software Update and Apple’s website.

After installing iTunes 10.5.1, users can subscribe to iTunes Match through the iTunes Music Store. 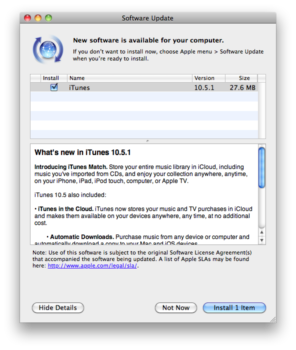 Tunes in the Cloud. iTunes now stores your music and TV purchases in iCloud and makes them available on your devices anywhere, any time, at no additional cost.

Automatic Downloads. Purchase music from any device or computer and automatically download a copy to your Mac and iOS devices.

Download Previous Purchases. Download your past music, TV, app, and book purchases again, at no additional cost. Previous purchases may be unavailable if they are no longer on the iTunes Store.

Sync with your iPhone, iPad, or iPod touch with iOS 5.

Wi-Fi Syncing. Automatically sync your iPhone, iPad, or iPod touch with iTunes any time they’re both on the same Wi-Fi network.