Apple remains the most popular choice of Americans purchasing a smartphone, as it retains 39% of the total US smartphone market. The rapid adoption of smart handsets has pushed market penetration up to 58% as of March: smartphones are used by 136.7 million Americans, up 9% since December, according to comScore’s MobiLens data. 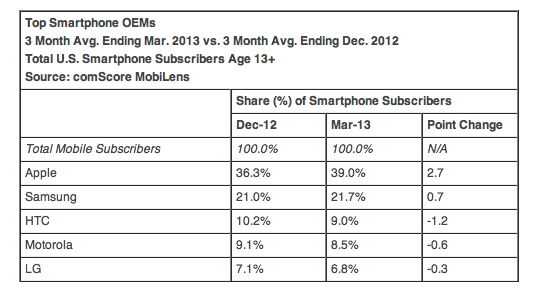 As the record iPhone sales numbers reported for the first quarter of 2013 had already hinted, and comScore’s most recent report emphasises, Apple’s popularity has grown among US smartphone users, as it has remained their top choice. 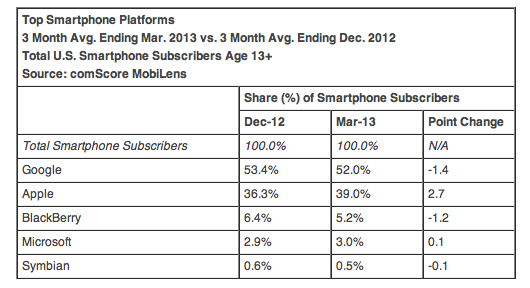 In terms of mobile operating system market share, Google remained the leader, retaining 52% of the US smartphone market, but it has recorded a 1.4% drop compared to December. Apple ranked second with 39%; in fact, iOS was the only platform and OEM posting noteworthy gains, as the majority of players — except Microsoft (up 0.1%) — have lost market share. Google, as mentioned above, BlackBerry 1.2%, and Symbian 0.1%.