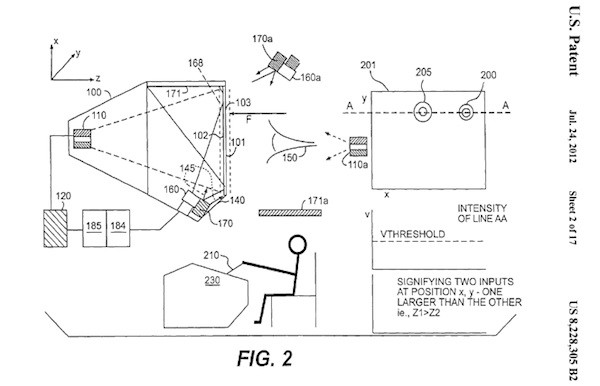 It appears Apple has secured a number of patents from Canadian inventor Timothy R. Pryor (from Tecumseh, Ontario), with one particular patent granted yesterday that relates to multi-touch, notes Engadget:

Described rather broadly as a “method for providing human input to a computer,” the patent (filed in July of 2009) is a continuation of one dating all the way back to 1995, and appears to cover some fairly basic multitouch-related functions. As detailed in the patent’s claims, that includes controlling a virtual object on a screen with two simultaneous touch inputs, as well as virtual controllers displayed on the screen that can also respond to touch input.

The patent in hand, filed in 1995, details visual and force feedback cues to touch input, along with a wide variety of other possible applications such as use within aircraft cockpit or vehicle displays, as revealed by the USPTO.

InformationWeek details the patents in hand for “covering methods for interacting with automobile telematics equipment and home appliances” were handed over to Apple in March by Mr. Pryor

The various patents and patent applications have to do with the control of machines, specifically through a combination of touch screens and video sensing. They include titles like “Man Machine Interfaces For Entering Data Into A Computer” and “Programmable Tactile Touch Screen Displays And Man-Machine Interfaces For Improved Vehicle Instrumentation And Telematics.”

Surely these would hint at the future of what Apple has in store for your home or automobile, but don’t count on it. We see various patents all the time and most of the time the ideas won’t come into fruition, but do give us a sense of what could be possible. Most likely these added patents to the Apple portfolio enable the company to move forward in all of those neverending legal patent wars.

What do you think? Will we see an iFridge or iStove in the near future?