Apple Admits it is Slowing Down Older iPhones, But Explains Why

Just under two weeks ago, a Reddit user wrote how Apple was throttling older iPhones with older batteries, as after a battery replacement on his iPhone 6s, performance improved in Geekbench scores.

Earlier this week, John Poole from Primate the Labs, the Toronto-based company behind Geekbench, confirmed these findings. 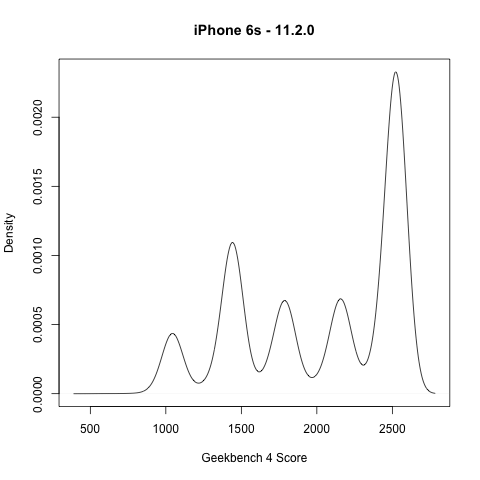 Now, Apple has provided an explanation to TechCrunch, admitting for the first time they do indeed throttle older iPhones, but it’s to prevent devices from shutting down and protect electrical components, as batteries age over time:

“Our goal is to deliver the best experience for customers, which includes overall performance and prolonging the life of their devices. Lithium-ion batteries become less capable of supplying peak current demands when in cold conditions, have a low battery charge or as they age over time, which can result in the device unexpectedly shutting down to protect its electronic components.

Last year we released a feature for iPhone 6, iPhone 6s and iPhone SE to smooth out the instantaneous peaks only when needed to prevent the device from unexpectedly shutting down during these conditions. We’ve now extended that feature to iPhone 7 with iOS 11.2, and plan to add support for other products in the future.”

I get the whole “it’s better to clock your phone slower rather than have it randomly crash” aspect to this story. It’s more the fact that Apple wasn’t upfront about it, and thus we’ve all been telling people “no, your phone isn’t getting any slower”. Turns out, it was.

A year ago, Apple started to replace iPhone 6/6s batteries in China after users experienced their phones unexpectedly shutting down. A similar program was launched in Canada and the USA, for the iPhone 6s.

Apple clearly should have done a better job communicating this battery “feature” to customers, instead of having them hear about it from third parties. That’s when conspiracy theories fly, and it makes it hard for customers to acknowledge official statements after the fact.