Apple has been granted a new patent by the U.S. Patent and Trademark Office titled “Electronic device display module”, that hints at a future MacBook with unique display unit that not only serves as a solar power supply, but also an external screen and secondary means of touch input, AppleInsider is reporting. 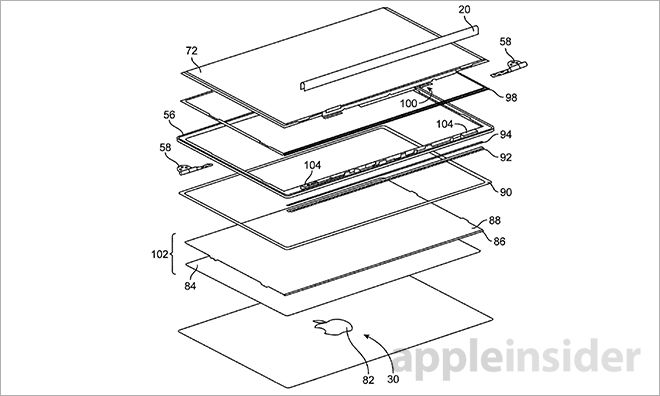 The patent details that the the two-sided display may be made up of a variety of materials including metal, ceramic, fiber composites and glass. In some cases, the display can be composed of electrochromic glass, which would allow the light to pass through when desired. A logo is disposed on the rear of the housing and can be illuminated via the same LED lighting as the front-facing display, as seen in all current generation MacBooks. As for the touch sensors, they are able to collect touch data which is then translated into system commands.

“For example, a user can touch a certain area on the rear panel to unlock a magnetic latch mechanism that holds the display housing closed. In another example, pass codes, media controls and other software input may be managed from the rear sensor array.

Finally, Apple proposes a photovoltaic system may also be disposed between the rear panel and front-facing LCD screen. With the glass backing and electrochromic layer in transparent mode, light is able to hit photovoltaic cells, which in turn converts the energy into electrical power for storage or immediate use”.

Apple’s two-sided laptop display patent was first filed for in 2010.

Ian Scott, chairman of the Canadian Radio-television and Telecommunications Commission (CRTC), told the House of Commons Industry and Technology (INDU) committee that he was once the victim of an e-mail spoofing scam — reports The Globe and Mail. Apparently, bad actors were able to impersonate Scott's e-mail address an undisclosed amount of time ago. The...
Nehal Malik
20 mins ago

Tesla and SpaceX CEO Elon Musk will purchase Twitter again with his original terms at $54.20 per share, as revealed yesterday in a surprise u-turn. The decision comes ahead of Musk’s scheduled deposition starting tomorrow and his October 17 Supreme Court case in Delaware with Twitter, as the Tesla leader originally wanted to renege on […]
Gary Ng
33 mins ago