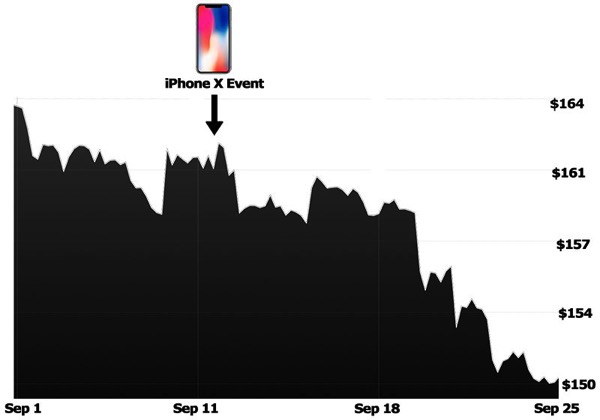 Apple’s stock (AAPL) hit a record high of $164.94 per share on September 1st. However, it has since seen a steady decline throughout the month, closing at $150.55 per share yesterday, which represents nearly 9% decline. While there has been some negativity about investing in the Apple stock, veteran Apple analyst Brian White from investment banking firm Drexel Hamilton sees this dip as a buying opportunity (via MacRumors).

“We believe concerns around the strength of this cycle are misplaced and we would be aggressive buyers of the stock during this correction,” said Brian White. “We believe more consumers in the developed parts of the world will pass on the iPhone 8/8 Plus and buy the iPhone X,” added White, in a research note obtained by MacRumors. “Those that are on the fence will likely wait to see the iPhone X.”

Similarly, Raymond James analyst Tavis McCourt has also said Apple’s recent pullback is a “trading opportunity” in his survey, which indicated that there could be higher demand for the iPhone X than Apple may have initially anticipated.

As one of the most bullish Apple analysts, White has a $208 price target set for Apple’s stock. If AAPL were to hit that mark, Apple would be over a trillion dollar company based on market capitalization.