Apple’s stock price reached its all-time high, pushing the company’s market capitalization level toward $660 billion as of this morning.

The iPhone maker’s market capitalization was worth $652 billion yesterday, which had already put the company close to its previous record of $658 billion, recorded in September 2012 around the iPhone 5 launch. 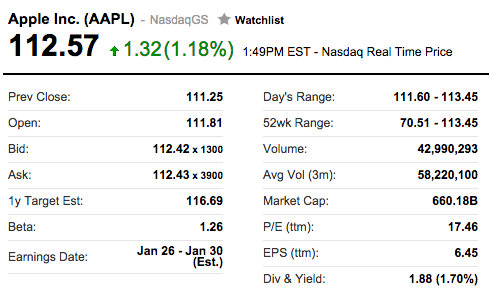 To put this information into context: Apple tops all US companies in market cap. It is followed by Microsoft and Exxon, which have a market capitalization that surpasses the $400 billion milestone.

Google is fourth, with a market capitalization of $375 billion, while Amazon sits at $114 billion.

We’ve seen the economic effect of the iPhone 6 and iPhone 6 Plus launch and that the handset is becoming a major contributor to the economy of countries like Taiwan, as the majority of Apple’s supply chain is from that part of the world.

Investors are confident that Apple will have a tremendous holiday quarter with iPhone sales setting a new record, especially in light of Tim Cook’s words from the fiscal Q4 earnings call earlier last month: “we are selling everything we make”.