Apple Stock Reaches All-Time High During Trading at $427.75 Per Share 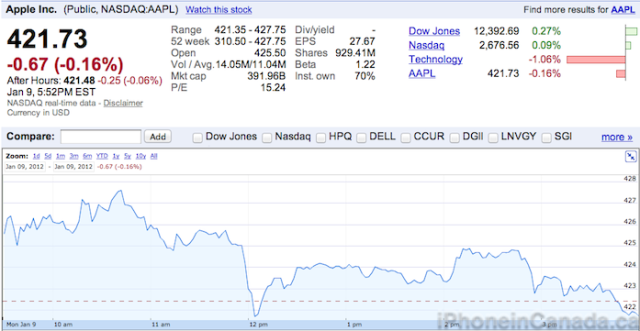 Today during mid-day trading, Apple’s stock price reached an all-time high at $427.75 per share, beating its previous high of $426.70 back in mid-October. Today’s shares ended up falling to close at $421.73.  At one point last September, Apple’s stock valuation made it the largest company in the world.

In other news, Apple also filed its proxy statement for investors, which revealed CEO Tim Cook made roughly $378 million dollars in 2011. Last August, Cook was also awarded 1 million shares of stock. Behind Tim was Eddy Cue, Senior VP of Internet Software and Services at almost $53 million dollars in compensation.

I would say Tim Cook was compensated pretty fairly for 2011–$378 million dollars  can buy a lot of iPhones.