Apple to Meet with “Made for iPhone” Accessory Makers in China

TechCrunch reports Apple is set to hold a conference in China with their ‘Made for iPhone/iPad/iPod’ program partners to discuss AirPlay and Bluetooth standards as well as restrict sales of Lightning connectors to partners only:

We’re now hearing from a source close to Apple’s accessory manufacturing partner that the company plans to hold a conference in Shenzen, China for its Made for iPod/iPhone/iPad (MFI) program partners on November 7 and 8, similar to the one it held last year between December 7-9 when it expanded the MFI program to promote adoption of new AirPlay and Bluetooth standards. We’re also hearing that Apple will strictly regulate sales of Lightning connectors for MFI partners, and that the cost per part for those components, while not unreasonable, is fairly high compared to other widely-available standards like USB.

What’s interesting to note here is Apple wants a tight control over its proprietary Lightning connector, which was noted by Chipworks to contain an unpublished Texas Instruments chip suspected dedicated to securing chip from being cloned, but the latter appears to be inevitable.

Apple’s MFi Program is described as:

Join the MFi licensing program and get the hardware components, tools, documentation, technical support, and certification logos needed to create AirPlay audio accessories and electronic accessories that connect to iPod, iPhone, and iPad.

The screenshot below notes joining the program will allow companies to get access to the necessary “hardware connectors and components that are required” to make iOS and AirPlay audio accessories and more. If you want to play ball, you’ll need to meet Apple’s strict requirements. 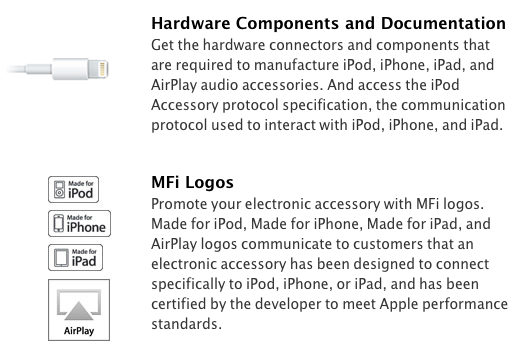 According to a report by The Intercept, Apple is using Chinese company Tencent’s blacklist to block access to certain websites via Safari in Hong Kong. Last month, Apple users in Hong Kong trying to access the code-sharing website GitLab were presented with a warning that says the website is being blocked for their own safety. Safari’s “safe...
Usman Qureshi
37 mins ago