Just a day after the Financial Times claimed that Apple was selling more iPhones in China than in the US, Canalys dropped the bomb: The iPhone became the No. 1 smartphone in China, thanks to the iPhone 6 and iPhone 6 Plus.

While the details are under wraps as of writing this article, the market research firm did point to an amazing turn of events: While Chinese smartphone vendors have been focusing on gaining ground in international markets, Apple has gained traction and become popular in their home market. It did the same in Samsung’s homeland, Korea.

According to Canalys, as of the end of Q4, 2014, the four most popular smartphone manufacturers in China are Apple, Xiaomi, Samsung, and Huawei, in that order.

Meanwhile, Fortune’s Philip Elmer-DeWitt has published his usual survey of professional and amateur analyst estimates of Apple’s fiscal Q1, and, as we’ve mentioned before, expectations are high.

The revenue estimate is a couple billion above Apple’s guidance for this quarter, with an earnings estimate that could enter “into the record books as the biggest in U.S. corporate history – bigger than Exxon’s $15 billion third quarter in 2008”, DeWitt says.

You can check out the estimates below. 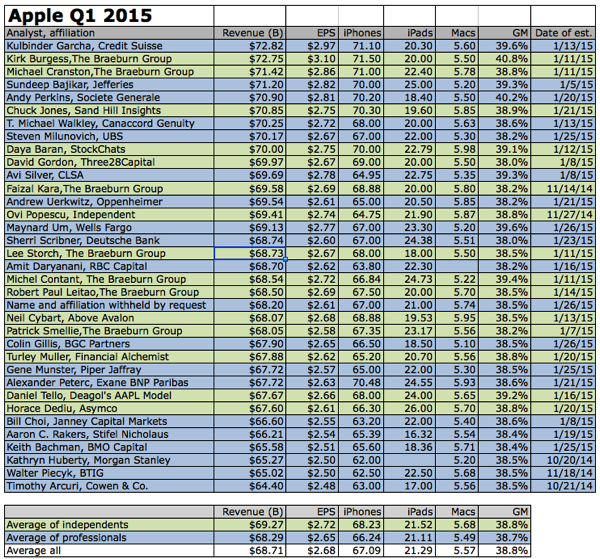