Several of Silicon Valley’s major companies, including Google’s parent company Alphabet, along with Apple, Facebook, and Uber are coming together to issue a join letter to President Trump, opposing his travel ban on immigrants from seven Muslim-majority countries. 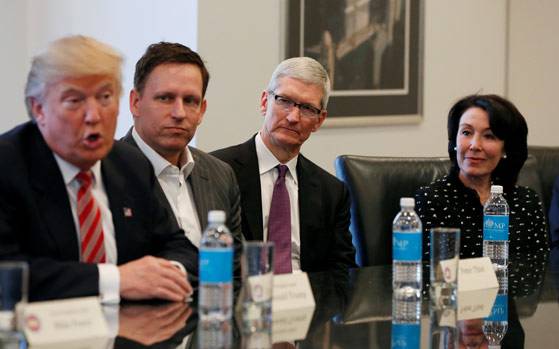 Up till now Apple, Facebook, Google and Uber have expressed their views independently but are now collaborating in a bid to maximize the chances of their voices being heard. A draft of the letter published by Recode  and Bloomberg highlighted the “contributions of immigrants from all backgrounds” as a prerequisite to “grow our companies” but also sought to find common ground of a “shared goal” to keep the country safe.

Donald Trump on Friday announced temporary ban on travelers from seven Muslim-majority countries and refugee settlements in US.  The order came into effect on Friday night and since then the President is facing strong opposition with thousands of Americans protesting. Silicon Valley, which is full of companies founded by first or second generation immigrants, has also been vocal with its big-wigs like Sergey Brin, Tim Cook, Mark Zuckerberg and others openly opposing the ban.

The letter said: “We share your goal of ensuring that our immigration system meets today’s security needs and keeps our country safe. We are concerned, however, that your recent executive order will affect many visa holders who work hard here in the United States and contribute to our country’s success.”

“In a global economy, it is critical that we continue to attract the best and brightest from around the world. We welcome the changes your administration has made in recent days in how the Department of Homeland Security will implement the executive order, and we stand ready to help your administration identify other opportunities to ensure that our employees can travel with predictability and without undue delay.”

In addition to drafting the letter, Apple is considering a lawsuit against President Trump’s order. Apple CEO Tim Cook said that “hundreds of Apple employees have been affected by the order,” and the company is in touch with “very, very senior people in the White House” in order to explain why the executive order needs to be repealed.

“More than any country in the world, this country is strong because of our immigrant background and our capacity and ability as people to welcome people from all kinds of backgrounds. That’s what makes us special,” said Cook.

Apple’s second-generation HomePod is set to launch on Friday, February 3, and ahead of the debut, the embargo has lifted on the first press reviews. HomePod 2 has the same price as its predecessor before the latter was axed, but this time supports Spatial Audio and room sensing for automatically-tuned sound, to go with a […]
Gary Ng
8 mins ago